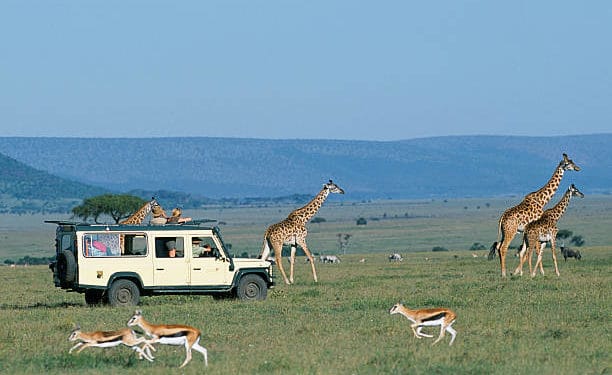 Travelling to Kenyan is something that every wildlife enthusiast should do. The country boasts of prolific wildlife and scenic landscapes making it one of the best safari destinations in Africa. Most people will mention Masai Mara Game Reserve as the ideal safari destination, especially now that the Great Wildebeest Migration is happening, but private conservancies in Kenya could offer thrilling safari experience.

Mara North Conservancy came into existence in 2009 with the aim of preserving the wilderness, flora, and fauna of the Northwestern zone of the Great Masai Mara. The park is located at the Northern edge of the Masai Mara National Reserve and occupies 74,000 acres thus making it the largest of all private conservancies in the Mara ecosystems. It is located along the migration corridor, and that makes it a great place to be during the Great WildebeestMigration. The conservancy is also home to the Big 5 animals and many endangered species.

Mara Naboisho Conservancy is the second largest conservancy in the Mara ecosystem. The park is situated at the northeastern section of the Masai Mara sitting on 50,000 acres. Due to its large area and strategic location in the Mara ecosystem, the park enjoys a vast population of wildlife year round. Mara Naboisho is home to lions, elephants, buffalo, leopards, impalas, zebras, giraffes and hundreds of bird species. For wildlife enthusiasts, you will enjoy night drives in the bush.

Situated along the Northeastern section of the great Masai Mara, Olare Motorogi is another popular private conservancy to stop by. Occupying a total of 35,000 acres, Olare Motorogi is located along the migration corridor for animals including the Great Wildebeest migration. Over the wildlife population has significantly increased and visitors have a chance to see Big 5 in this park.

Established in 2010, Siana Park is situated on the Eastern section of Masai Mara. Although the 29,000-acre wildlife conservancy is relatively young, it enjoys a vast variety of wildlife. Visitors coming to Saina enjoy viewing some of the Big 5 animals including Buffalos, elephants, leopards, and lions. Other game species in the park include zebras, gazelles, hyenas, and cheetahs amongst others. The landscape is incredible.

Solio is one of the oldest private game reserves in Laikipia having been started in the 1970s. The park aimed to help improve the declining population of the endangered species specifically rhinos. Today, the park is best known for promoting the population of the rhino by offering these animals 24-hour security. Solio is also home to some of the Big 5 animals including leopards, lions, and buffalos in addition to rhinos. The park has gained world recognition due to its conservancy efforts and more so the large population of rhinos, which is an endangered species.

The 62,000-acre Lewa is one of the most successful conservancy stories in Africa. Started the early ‘80s in response to the diminishing population of Kenya’s black rhino, the park has also helped improve the population of other endangered wildlife. Today, the park is home to a range wildlife species and more the Big 5. Join the annual Lewa Marathon in Laikipia and enjoying running in the wilderness next to the game.

This another popular safari destination in Laikipia Kenya.The 90,000-acre private wildlife sanctuary is situated between Mount Kenya and Aberdare Mountain. The park is neighbor to the Solai game reserve and is also best known for its large population of both the endangered white and black rhino. Ol Pejeta boasts of an astounding variety of animals including the Big 5. Visitors enjoy seeing black and white rhinos, leopards, buffalo, lion, elephants, gazelles, chimpanzee and many others. The park was home to the late SUDAN, the only remaining male white rhino.

If you are having a good time at the Kenyan Coast, then Taita Hills Sanctuaries, next to Tsavo Game Reserve, is the place to stop by. The Park is currently under the Sarova Chi of Hotels and just a few miles from the popular Diani beach. You’ll enjoy seeing a variety of wildlife. The sanctuary is home to some of the Big 5 animals including lions, buffalos, and elephants. The scenic landscape and wide variety of animals make Taita Hills Sanctuaries one of the top private game park destinations in Kenya.

If you are planning to explore Kenya’s wildlife and landscape to the fullest, then you need to include some of these beautiful private conservancies. It will be an adventure that will be filled with lifetime memories. Most of the conservancies permit off-road drives, night drives and horse riding, which is not possible in national game reserves. These parks have their own safari lodges, vehicles, tour guides and thus you will definitely have an incredible safari experience.