Age Is Irrelevant When It Comes to Fitness 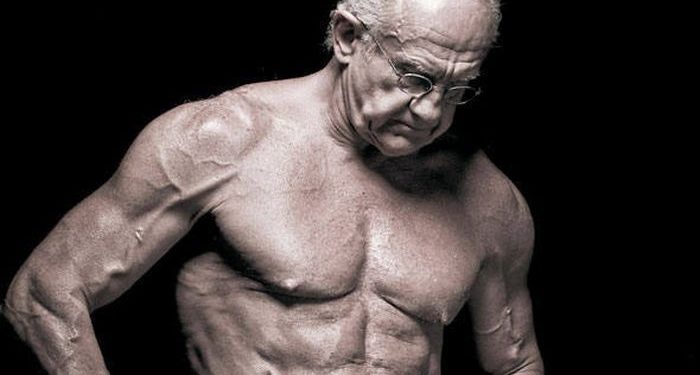 Don’t let anyone ever tell you that you are too old to work out. As Anthony Bourdain or even Tom Brady (who is 40 years old, believe it or not!) have shown, age is no obstacle when it comes to fitness, and with a little effort people of any age can whip themselves into shape and build themselves a chiseled body to be the envy of those half their age.

This doesn’t mean that you can turn back the clock, but it does mean that it is absolutely possible to slow it down a considerable degree, maintaining peak condition well into the time that most people are being packed off into retirement homes. But how? Well, Joe Friel, author of the book Fast After Fifty, has more than a few tips on how to stay in shape no matter your age.

According to Friel, the most dangerous thing that happens to us as we age is not the actual physical changes, not immediately at least, but instead are our changes in lifestyle. “There is a reason to believe that the major contributor to the performance decline in athletes as they get older is nurture, with nature playing a smaller role,” he writes in his book.

As we age, exercise behavior (nurture) appears to play a significant role in how our given genetic biology (nature) plays out.

In other words, it is vitally important to not settle into that sedentary state of retirement that is all too common in older people, and instead, you need to keep working out, maintaining the rhythms you would have in younger years to the best of your abilities.

This, of course, is no easy task. To remedy this problem, Friel suggests that older people focus more on brief, high-intensity exercise such as the 7-minute workout in order to stay in shape. “Both training volume and intensity are important to the maintenance of fitness as we age,” Friel tells us, “but the intensity is more important.”

Working out regularly is also a key to staying in shape, and it is important that you don’t start letting gaps appear in your schedule.

Once one gap forms, that makes it all too likely for more to appear, so try and build a schedule and stick to it. Celebrity chef Anthony Bourdain’s new look is a testament to the fact that daily workout can be effective, even at an older age, as the 61-year-old was recently seen sporting a six-pack that would make 22-year-olds jealous.

His secret? Daily jiu-jitsu practice. Even when he is on location for his show, Bourdain has said that he makes it a point to find the nearest jiu-jitsu gym and get there in the morning before shooting.

And then, of course, there is the diet. That’s what Patriot’s QB Tom Brady credits as his fountain of youth, believing that a healthy diet is what has allowed him to remain at the top of his game, despite being one of the oldest athletes in the sport.

Brady tends to focus heavily on anti-inflammatory foods to keep his limbs moving at maximum efficiency, while Friel seems to believe that the most important thing for a successful diet as we age is protein.

And then, of course, there are all of those celebrated superfoods out there, all of which supposedly have their own benefits that they provide to your bodies.

Another major factor we can change to stay fit at an old age is getting enough sleep. A recent study from the University of Michigan found that a startling one in three older Americans need to take a supplement in order to fall asleep at night, and this, to put it simply, is not good for us at all.

“Sleep is definitely the key to better performance with aging,” Friel tells us, advising older people to get as much sleep as they possibly can in order to give their bodies the rest they need.

But how much, exactly, should we be getting at night? Well, Friel says “if you’re using an alarm clock to wake up, you’re not getting enough.”

Getting old is never fun, but it is certainly not an excuse to stop working out. For more tips on how to stay in shape at an older age, I would definitely advise you to go pick up a copy of Joe Friel’s Fast After Fifty and keep on reading these posts here.

There are plenty of new tips coming up every day, so keep those eyes peeled and get yourself back into shape!

6 ways to Maintain a healthy heart

Age Is Irrelevant When It Comes to Fitness