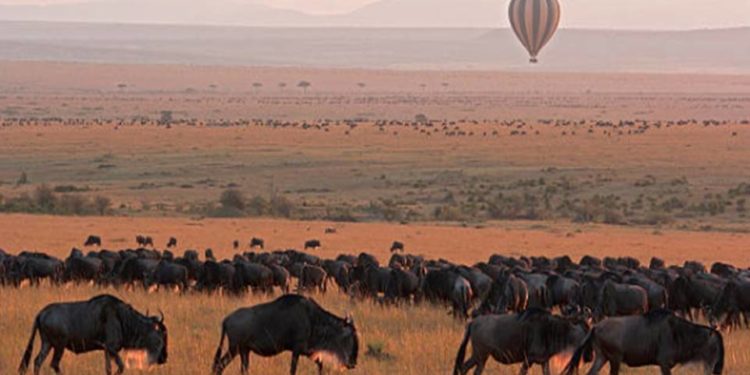 Now that Serengeti is experiencing some sought of dry conditions, the Great Migration is majestically heading to the north, and soon Masai Mara will be the idyllic destination for wildlife enthusiasts. But timing is critical if you are to experience the spectacle to the fullest? The most frequently asked question by Africa safari is, when is the best time to catch the Great Migration? Well, what most people don’t understand is that the migration of over 1.5 million wildebeest and thousands of Zebra and gazelles is not just a simple trip from point A to B. It is a year-round circuit filled with picturesque sights.

You may have seen the migration on various TV programs or Disney’s The Lion King but have you ever wondered what the real spectacle looks like? Well, this is a mind-blowing experience that cannot compare with any of the African wildlife experience. In fact, an Africa safari is never complete without a sight of the Great Migration. There is a reason why it was named as the 8th Wonder of the World!

What Is The Great Migration?

The Great Migration is an epic phenomenal that happens between Kenya and Tanzania. It is a movement of herds of wildebeest, zebra, and gazelle in search of greener pastures. According to the migration route, the millions of animals move in a clockwise direction from Serengeti, Ngorongoro to Masai Mara each year. The movement is controlled by the rain season between these three ecosystems, and that is what keeps the herds on the move.

However, scientists believe that this natural phenomenon is designed to support these three ecosystems. By their searching for greener pastures, the population of the game is preserved since they are not likely to die from drought. There is also a massive population of predators whose existence depends on this migration. Lions and hyenas and other African big cats depend on the migration of this prolific wildlife for survival. Crocodile in the Mara and Grumeti Rivers to some extent depends on the Great Migration to survive.

For you to pick the best time to catch the Great Migration, it is imperative that understand the full migration cycle. The ever-moving cycle can be a little bit tricky, and you can miss the real spectacle if you miss out on the right timing. At the beginning of the year, January, the herds are moving towards southern plains of the Serengeti National Park. January to February is the calving period, and around 300,000 calves are produced. This period provides a rare spectacle in this part of Serengeti as the lions, hyenas, and other predators hunt calves for prey. So if you want to catch the sight of The King of the Jungle hunting, this is the ideal time to for a safari.

March to May is the second phase of the migration. During this period, the herds are around North and west of Serengeti near Lake Victoria. It is during this time that the big rut occurs- it is the mating season for the wildebeest. Territorial rituals characterize the period as male wildebeests try to woo the females. It is a violent period of the year for the herds but a perfect time for a Tanzania safari. If you are looking for beautiful wildlife photos, this is the ideal time to capture wildebeest sparing and fighting to win female affection.

June to early October is the most popular time for the Great Migration. It is the time when the great crossing of Serengeti is in earnest. The herds are cross two major crocodile-infested rivers- R.Grumet and R.Mara to reach Masai Mara in Kenya. The intersection of the two rivers is a spectacle that has been captured hundreds of time and continues to attract thousands of wildlife enthusiasts each year. By August and September, Serengeti has almost dried up and the entire herd if millions of game arrive in Masai Mara. It is the perfect time take a Kenya safari to Masai Mara. In late October and November short rain starts in the South and herds starts moving towards the south for birthing and the cycle begins again.

The Best time to experience the Great Migration depends upon what you are looking for. Since it is not an event but an ever-moving cycle, you need to study the various periods of the year and pick what you love the most. If you want to experience the Big Cats hunting for prey, then June to October and January to February is the perfect time for an East African Safari. However, June to October is the idyllic period to catch the Great Migration in Masai Mara.
June to October is a dry season, and thus almost all animals including the big cats can be seen around water points. The Vegetation is not thick, and thus wildlife can be seen clearly from a distance. With millions of game animals in Masai Mara, which is predator-infested, it the ideal time to enjoy the exotic glamour of Mara ecosystem.
Embed from Getty Images

If you want to catch the real Great Migration spectacle, now you know when to plan for an East African safari. As you enjoy the prolific wildlife and the dramatic images of this phenomenon, you will also sample the culture of the Masai People who have coexisted with wildlife for centuries. The trick is to do the right timing to ensure that you have gotten the best out of your Kenya safari or Tanzania safari.

Staying Strong in the Pool? Try these Water Workouts