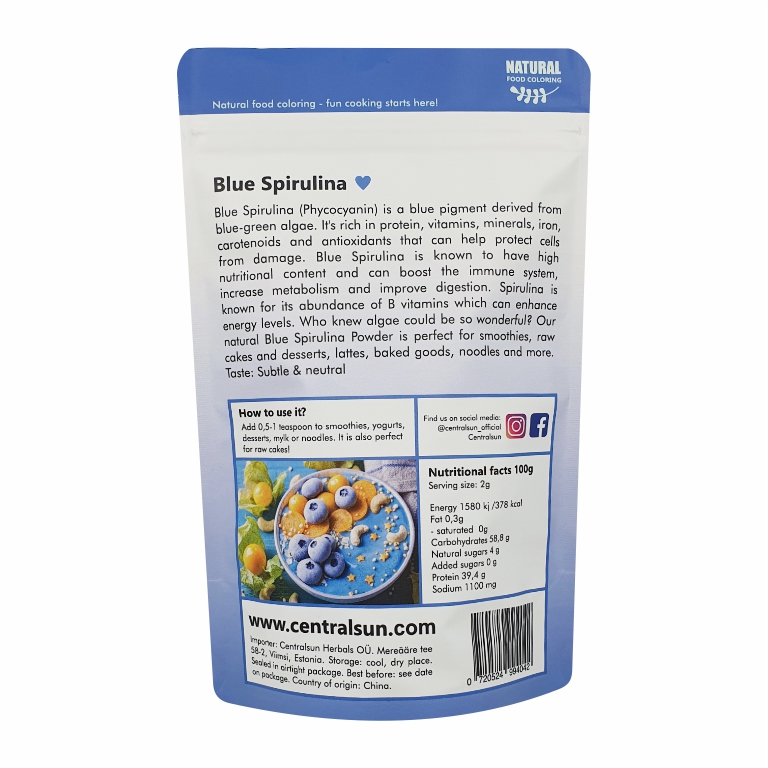 The blue-green algae that we consume is called spirulina. It belongs to the genus Arthrospira, which means “joint spiral”. It has been used by the Aztecs in Mexico, the people of Lake Chad, and many other cultures for centuries. It is a naturally occurring algae that is commonly grown in lakes.

Blue Spirulina extract, which is a natural food supplement, is an effective way to reduce triglycerides. It is rich in a variety of beneficial compounds, including phycobiliproteins, which have antioxidant, anti-inflammatory, and neuroprotective properties. It also contains polysaccharides, which have immunomodulatory, antiviral, and anticancer properties. One study found that a supplement of a gram or more a day reduced triglycerides and body fat by 16.3%.

This natural food supplement reduces triglycerides and has been shown to reduce cholesterol. It may also have positive effects on cardiovascular health, including lowering blood pressure and reducing LDL cholesterol levels. It also increases blood vessel relaxation, which may make it beneficial for those who are at risk for heart attacks and strokes. Further research is needed to fully understand the role of spirulina in cardiovascular health. Spirulina contains phycocyanin, which fights free radicals and protects the body’s cells from damage.

There are many benefits to consuming Blue Spirulina extract. It is an excellent anti-inflammatory and is believed to lower “bad” LDL cholesterol. It has been found to reduce levels of several cytokines that drive inflammation. It also reduces levels of histamine produced by white blood cells. Blue spirulina also protects against oxidative stress and decreases inflammation, two factors that have a negative impact on the eyes.

Spirulina is a blue-green algae that grows in both fresh and salt water. These microbes are rich in antioxidants, which are essential for maintaining health. The main active ingredient is phycocyanin, which is the substance that gives spirulina its blue color. Phycocyanin inhibits inflammatory signaling molecules and has impressive antioxidant and anti-inflammatory effects.

A blue spirulina extract may be a powerful weapon against herpes, flu, and HIV. The blue algae contains a compound called calcium spirulan, which inhibits the replication of HIV and other viruses. Researchers have identified the molecule as an effective antiviral agent. Further research is needed to confirm the effects of spirulina on these ailments.

Researchers have found that a water-soluble spirulina extract inhibits the replication of the herpes simplex virus in HeLa cells. Moreover, the extract inhibited viral penetration in a dose-dependent manner. In addition, the substance also inhibited the synthesis of both virus-specific and host-cell proteins.

A study in rats showed that Spirulina protects islets from STZ-induced destruction in a rat model of type 1 diabetes. Wistar rats were injected with STZ, and the cellular morphologies of the islets were assessed using H&E staining. The islets were also labeled with antibodies to insulin and nitrotyrosine. The islets were then examined with a microscope. The serum insulin levels of the experimental animals were also measured using IMT i-solution software. The study showed a significant difference between groups, and indicated that the extract protects the islets.

In addition to its anti-inflammatory and antioxidant effects, Blue Spirulina extract is also effective in improving lipid profiles and may improve the symptoms of diabetes and obesity. The study also showed that the supplement improved satiety and reduced appetite in obese individuals. It also lowered the total cholesterol levels and increased the levels of HDL-C. Further research is needed to determine if this supplement has a beneficial effect on obesity and other metabolic diseases.

Researchers have concluded that the blue-green algae spirulina contains powerful antioxidants that lower the risk of cancer. Its major biliprotein, C-phycocyanin, has antioxidant, radical-scavenging, and antiinflammatory properties. The seaweed is also highly digestible, so it is not likely to cause gastrointestinal upset.

The study also indicated that Spirulina may increase the production of cytokines, a type of immune cell protein that stimulates the immune system to attack disease-causing agents. While the study did not assess the effect of Spirulina on cancer-causing organisms, it showed that it inhibits tumor growth in mice.

Spirulina also contains phycocyanins, which are potent antioxidants and anti-inflammatory compounds. These compounds have been shown to increase the production of white blood cells, which are essential for fighting off infections. Furthermore, it has been found to increase the number of macrophages, which are immune cells that eat pathogens and cancer cells.