Hip Thrusts For More Than A Big Butt! 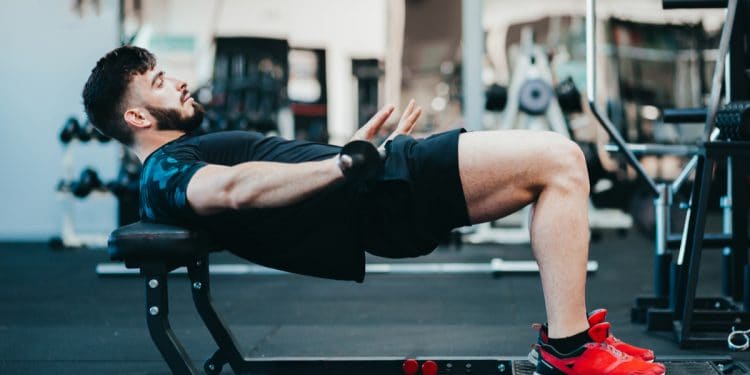 Oh, the glutes!! They are currently the most popular muscle group to train. And so, the glute isolating hip thrust has become a training staple. The hip thrust does work our favorite muscle group; but more importantly, this exercise is also used to treat a common modern day muscle imbalance.

The Twerking Craze And Glute Activation

Popular culture is butt-obsessed! From Cardi B and Tik Toc to the local gym men and women are bouncing their bottoms with gusto. The twerk shows no signs of relinquishing its throne to other dance moves.

The butt’s center-stage performance has led to a similar focus on building size, strength, and power in the glutes. The squat and deadlift are great for glute development, but no exercise targets the derrière like the hip thrust.

Hip thrusts are largely performed for vanity’s sake; yet, the outcome is reduced pain in the middle and low back, pelvis, hips, knee, and ankles.

All About that Bass: Why We Hip Thrust

The gluteus maximus is the largest muscle in the body (by FAR). While the majority of our 650+ muscles are relatively thin and unimpressive, the glutes are large and thick.

The glutes are huge muscles that can handle large loads and generate enormous power. However, the modern-day reality of constant sitting in addition to a similarly constant activation of our quadriceps and adductor muscles (even during twerk performance) inhibits the glutes.

Many people are carrying around tight, inactive booty muscles that are not performing their share of the work.

Inhibited and stretched glute muscles can not play their role in the daily activities of walking, bending, or even just standing straight. Our bodies are pretty amazing, and they don’t shut down just because a key player is sitting out the game.

Continue on in this way, as so many do, and the situation will lead to muscle imbalance, joint dysfunction, and injury. Thus, isolating exercises like the hip thrust are vital to health.

Stretching “Tight” Glutes Is Not The Answer

It is common for personal trainers to note signs of glute inhibition during the objective assessment of a new client. Moreover, such a client will typically complain of tightness in their hamstrings as well as back or hip pain. Stretching these “tight” muscles is the perfect antidote, right? Wrong. Often, these muscles are not constricted.

So, when our quads and hip flexors are tight, our glutes are inactive. Inactivity in the glutes will mean that other muscles are performing all of their work, leaving the glutes to atrophy as well.

Moreover, this shortening (contracting) of our anterior (front of the body) muscles will generate a lengthening of the posterior muscles. A client may feel the need to stretch their posterior muscles. Yet, these muscles are already being pulled and stretched to the point of injury. Stretching them further is not the answer. As they continue to lengthen they are likewise stretching other tissues, such as muscles of the lower back or tendons in the knees.

Reciprocal inhibition is a neuromuscular reflex that inhibits opposing muscles during movement. For example, if you contract your elbow flexors (biceps) then your elbow extensors (triceps) are inhibited.

Step One: Release the Antagonist

The first step to relieving the perceived tightness in the lower back, glutes, and hamstrings, is to release the contraction in the opposing muscle groups (the hip flexors and the quads) through myofascial release and/or static stretching.

Once the overactivity in the hip flexors and quads has been diminished, now it is time to activate the glutes. Properly performed hip thrusts are the most effective exercise for glute activation. While squats, lunges, and leg curls do target the glutes, they’re also activating the muscles we want to inhibit.

The hip thrust, on the other hand, isolates the glutes specifically, really firing these muscles and inhibiting their antagonists.

Performing this exercise will build strength, endurance, and power in the three glute muscles. More importantly, it puts our largest muscles back in action, benefiting overall musculoskeletal health, and saving us from increased risk of muscle, bone, tendon, ligament, and nerve pain, which today’s common postures create.

The video at the beginning of this article is a perfect example of how to perform a weighted hip thrust.

The National Academy of Sports Medicine (NASM) provides these tips for proper execution:

Many people find that they are suffering from seemingly tight hamstrings, back and knee pain. This cluster of symptoms is often due to an overactivity in the hip flexors and quadricep muscles. This inhibition of the glutes causes synergist muscles (such as the hamstrings) to step in and perform work they aren’t intended to, and further escalates the situation by weakening the glutes over time.

In order to rectify the situation, we should release the overactive muscles thru foam rolling and static stretching. (Please note that active and dynamic stretching should NOT be performed.) Then, we can activate and strengthen the glutes using the muscle isolating hip thrust, and twerk away!!

7 Post-Workout Supplements to Kick-Start Your Recovery

Reduce Belly Fat Through These Simple Yet Effective Exercises

Barbell Rows: 9 Things NOT To Do

Why You Should Ditch The Treadmill and Try The Stair Climber