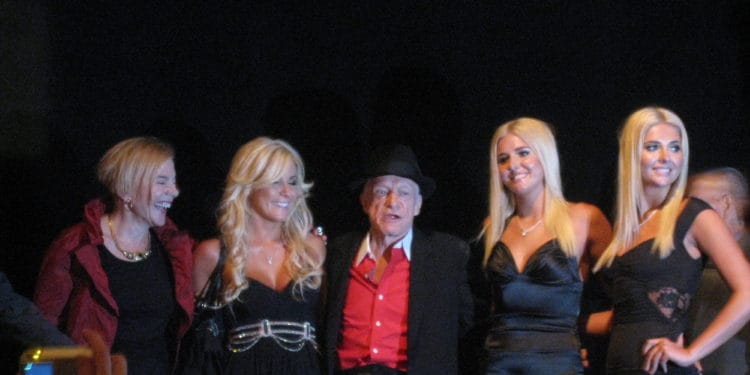 Hugh Hefner, the legendary founder, publisher, and Editor in Chief of Playboy Magazine has died at 91-years-young.

Always a kid at heart, he leaves behind a legacy, that agrees with it or not, made a lasting imprint on American culture. While in later years he became more of a silk-robe-wearing known as the “Hef,” who was known most for his sexual prowess and multiple Playmate wives, his story is one of legends.

Hugh Hefner was born in Chicago in 1926 to teacher parents who were quite conservative, according to Hefner. “"My folks were raised pure prohibitionist," Hefner said in an interview to The Hollywood Reporter. "They were very good people, with high moral standards — but very repressed.

There was no hugging and kissing in my home." Hefner served in the Army from 1994 to 1946, and it is there that he had his first foray into writing as a writer for a military newspaper. After the army, he went to the University of Illinois where he graduated in an impressive two years.

He began his career in magazines as a copywriter for Esquire Magazine. When he was designed a $5 raise, he left the magazine, and one year later he was working on a project that would change the course of his life forever and Society’s as well.

In 1953 he took out a loan for $600 to begin his quest to start his magazine. With the help of about 50 investors, Playboy (formerly called Stag Party) was launched with just $8,000. The first issue began in December 1953 and featured a nude Marilyn Monroe. That first issue sold over 50,000 copies.

While Playboy caught attention through its nudity, Hefner also published quality essays addressing social issues in the pages of the magazine. "I’ve never thought of Playboy, quite frankly, as a sex magazine," he told CNN. "I always thought of it as a lifestyle magazine in which sex was one important ingredient." The magazine was a testament to Hefner’s stance as a staunch advocate for freedom of expression civil rights and sexual freedom.

The magazine played an impact in the sexual revolution of the 1960s, as it opened the conversation of sexual expression to a nation that seemed to always play on the conservative side.

Over the years, Hefner and Playboy helped launch the careers of some of the most iconic sex symbols. Playmates of the Month, as the centerfolds were called, launched careers as models and actresses. With the success of the magazine reaching its height in the 1960s and 1970s, Hefner took on a celebrity status, creating himself and the Playboy lifestyle as a brand beyond just the magazine.

In 1971, Hefner opened the Playboy Mansion in Los Angeles. Here, Hefner resided with many Playboy bunnies, hundreds of them becoming his bedmates over time. Hefner, always clad in a satin robe, took on this persona as the man who dated and sometimes married, multiple women at a time, most who were at least half his age.

The television show Girls Next Door captured an inside look at this eccentric lifestyle. The antics raised eyes and critics. In 2016 the Playboy Mansion was sold for over $200 million. In 2017 his son took over the magazine as his health declined.

Hefner married Millie Williams in 1949, but this would not be a married that lasted. Admitting to him that she’d cheated on him, she allowed him to see other people while they were married to make up for her mistake. While the couple had two children together, they divorced in 1959. In 1989 Hefner wed Playmate Kimberly Conrad. They had two children together. In 2012 he and Chrystal Harris, another Playmate 60 years his junior, were married.The two were still married at the time of his death.

While his lifestyle was far from normal, we cannot recognize Hugh Hefner as a cultural pioneer and activist.

In a statement to CNN, Hefner once said, “"I would like to be remembered as somebody who has changed the world in some positive way, in a social, sexual sense, and I’d be delighted with that.

I’m a kid who dreamed the dreams and made them come true." Always a kid at heart, Hefner lived his life as a true Playboy, living up the very essence of the lifestyle and publication he created.

6 Fit Tips to Stay on Track While Traveling

10 Ways to Improve Your Life in Just a Month