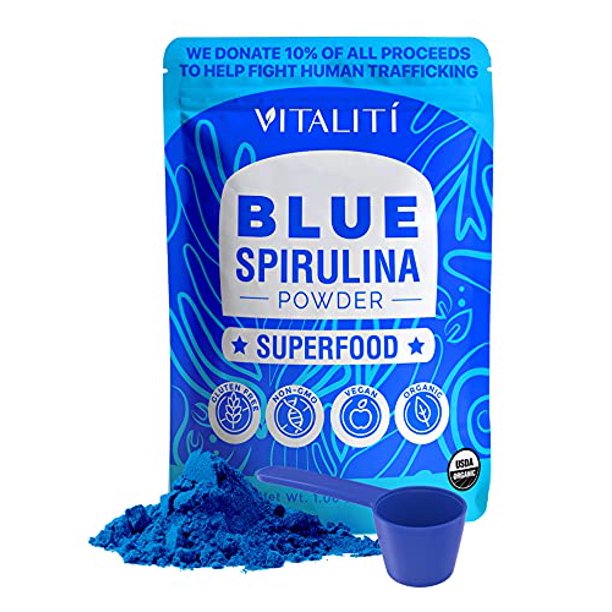 Spirulina is a powerful food supplement. It is a natural remedy for nephrotoxicity and nonalcoholic fatty liver disease. It also boosts the amount of lactobacillus, which produces vitamin B6, an essential nutrient for energy. Its high nutrient content has led to its designation as a superfood. The downside is that it’s not the cheapest source of vitamins and minerals. It is much more expensive than other “greens” and the serving sizes are much larger than those of other sources.

Blue Spirulina Powder is derived from an algae called spirulina, which has long been used as a natural food supplement. This algae is one of Earth’s oldest life forms, and is rich in nutrients. It is considered a “superfood” because it is an all-in-one source of nutrients and contains protein comparable to that of an egg. This natural food supplement is widely available at health food stores.

Spirulina is touted as a healthy food for the heart and metabolism, and it has also been used to treat mental health disorders, such as ADHD. However, there is currently little scientific evidence to support these claims, so it is important to consult a healthcare provider before taking this natural food supplement.

Spirulina is rich in magnesium, which supports normal bodily functions. This mineral is essential for building proteins and generating energy. Most people don’t get enough magnesium in their daily diets. Additionally, spirulina contains a powerful plant-based protein called phycocyanin, which may have anti-inflammatory and antioxidant properties. Antioxidants help fight inflammation, which plays a key role in many serious diseases.

Phycocyanin is one of the most important substances in spirulina, a type of blue-green algae. It accounts for 20 percent of the dry weight of spirulina and is thought to be the active ingredient responsible for its medicinal properties. In animal studies, it has been shown to have antioxidant properties. In humans, it has been studied only in a small number of cases, but it has no known toxicity.

Researchers have found that blue-green algae can protect the liver from several diseases. These include nonalcoholic fatty liver disease and cardiovascular disease, two of the biggest threats to health in the developed world. Studies in animals and cells have shown that the algae can improve blood lipid profiles and fight inflammation. Oxidative stress and inflammation are known risk factors for heart disease.

Studies have shown that spirulina is effective in reducing the severity of fatty liver in people with NAFLD. It decreased the liver markers, reduced body weight, and helped patients reduce their triglycerides.

Blue Spirulina Powder is derived from the algae known as spirulina. This type of algae is high in antioxidants, B vitamins, copper, manganese, and many other nutrients. It is also an excellent vegan source of protein and iron. Its main active ingredient is phycocyanobilin, which mimics the bilirubin compound in the body. It also inhibits the activity of an enzyme complex known as NADPH oxidase.

Spirulina has been shown to protect against nephrotoxicity due to its antioxidant properties. It also inhibits NADPH oxidase, providing potent anti-inflammatory effects. However, more research is needed to determine its therapeutic value.

Spirulina is also known to be a superfood, which is why it is commercially available in a variety of forms, such as tablets, energy bars, and smoothies. While spirulina may be an effective supplement for nephrotoxicity, the best way to know whether it’s right for you is to talk with your healthcare provider about the supplement.

The consumption of Spirulina is a popular, growing trend around the world. However, few studies have examined heavy metals in the product. In this study, the authors determined heavy metal concentrations in 25 different commercial Spirulina powder products. To do so, they ground and digested samples from different producers.

Although spirulina can be grown in freshwater rivers, ponds, and lakes, it is not usually grown in the ocean. This raises concerns about contamination, especially if the spirulina is grown near China or Japan, where the Fukushima nuclear disaster occurred in March 2011. In addition, spirulina is a good absorber of heavy metals, and in some cases, it has been used to clean up contaminated water supplies.

Many commercial brands of spirulina contain low amounts of heavy metals. But some products contain high amounts, which can be dangerous for human health. Lead, for example, can cause organ damage, even in low amounts.