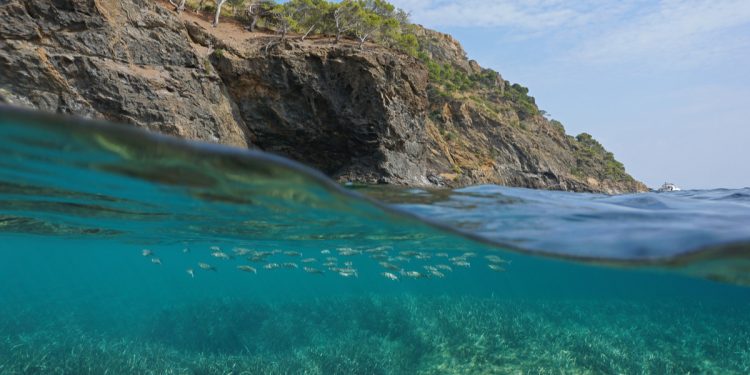 Sure, seagrass doesn’t have a great set of abs or carry a triton. As a matter of fact, this drab looking plant doesn’t appear impressive at all. As is often the case, looks can be deceiving, and this unassuming super hero is a great example. Seagrass is an ecological gold mine with benefits that extend far beyond the ocean’s surface. Below, we present five of the most significant ways that seagrass meadows benefit life on the planet as well as ways that readers can contribute to preserving them.

What is Seagrass? Why is it important?

Firstly, when discussing seagrass, it is important to understand what it is not. Seagrass is not seaweed. Seaweed can refer to any of 6,000 species of algae. It has no vascular tissue or root system. It clings to various structures using its “holdfast” and reproduces through spores.

Seagrasses, on the other hand, are very similar to land grasses. Interestingly, the 60-70 species which make up this classification seed, flower, produce fruit, and lay down root systems just like land grass. These simple attributes create immense ecological benefits.

Carbon emissions are a hot topic in both environmental and political circles. Industry is taking necessary steps to limit the amount of carbon being expelled into the environment, primarily in the form of fossil fuels.

Scientists explain that it is equally important to remove existing carbon, in the form of CO2, from our atmosphere. Carbon is the fundamental building block of all life and is not, in itself, a bad element. Yet, when organic material releases carbon too rapidly, problems occur. Simply put: a balance must be maintained in order for life on our planet to continue.

Seagrass is front and center in this quest to remove excess carbon from our environment, absorbing a whopping 30-40% more carbon per acre than our rainforests do. Moreover, seagrass is not prone to catching fire, as forests are, and releasing that carbon.

Seagrasses are called the “lungs of the sea” by conservationists. According to the Smithsonian, “one square meter of seagrass can filter 10 liters of oxygen every day through photosynthesis.”

In addition, the rhizome root system of seagrass, which attaches each blade to the next in web-like fashion, works to prevent storm surge and erosion from wave activity, protecting coastal cities and towns.

Home for Many Species

Seagrass meadows are rooted in mud or sand and rely on photosynthesis for food. For these reasons, they grow in shallow waters along the coasts of Florida, Virginia, and Hawaii. There they provide shelter and cover for a diverse array of sea life, including octopus, shrimp, crab, sponges, anemones, squid, fish, and clams. Moreover, the rhizome root system of seagrass stabilizes the ocean floor, preventing erosion and minimizing the pounding of surf on this precious habitat.

The predatory reality and tumultuous waves of the ocean can create a harsh environment for young sea creatures. Seagrass fields provide a respite for eggs to be lain and young to mature.

What’s better than having a great home? Having one that is both edible and regenerates! Seagrasses are a precious food source for our favorite ocean grazers – including the endangered manatee and green sea turtle.

All-in-all, seagrass is a pretty impressive hero of land, sea, and air. Yet, it has been taking a great beating and does need our help in order to continue serving marine life, coastal communities, and favorable carbon emissions. There are two primary challenges to seagrass preservation which readers can join in to address: agricultural run off and “prop scars.”

In 2018, Southwest Florida faced a harrowing ordeal. Algae overgrowth smothered life beneath the surface of the Gulf. All beaches and even fresh and brackish water canals suffered an enormous death toll.

What led to this atrocity? Agricultural run off from sugar plants in the area of Lake Okeechobee had leached into waterways. The fertilizers and other pollutants triggered massive algal blooms which covered the surface of the water and prevented the photosynthesis necessary for plants like seagrasses to survive. The effect was both ecological and fiscal for the community. The wheels of tourism ground to a halt as helpless residents took to social media in anger, posting videos of the carnage as evidence of what agricultural run off was creating. While seagrass preservation may tug less on the heart strings than that of manatee preservation, the two go hand-in-hand.

As seagrass beds and recreational boats share the same environment, it is paramount that boaters be aware of how vital these meadows are and how easily they can be destroyed by boat propellers. Both agricultural run off and “prop scars” are being addressed by the US Environmental Protection Agency and local waterway preservation entities.

What can I do?

Seagrass preservation is just one example of people using the planet’s own ecological systems to preserve and promote life while minimizing manmade damage. To learn more about how you can be of assistance in preserving vital seagrass meadows, contact your city’s local authority. If you’d like to see one of these biodiverse areas in person, you can also snorkel a seagrass meadow at your favorite vacation spot.

Managing Chronic Pain: Tips to Help You Live Your Life

4 Breathing Tips To Boost Your Cardio