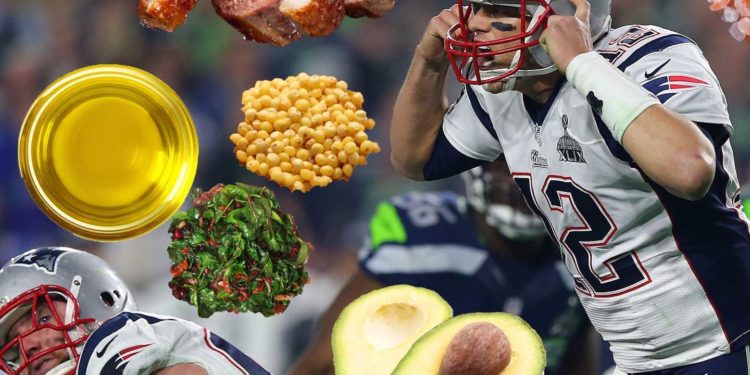 It isn’t impossible to look fit in your 40’s, and New England Patriot’s quarterback highlights this fact every weekend during football season in front of millions of NFL fans.

Tom Brady, who just turned 40 this August, shares a number of his favorite recipes and nutritional tips in his recently released book “The TB12 Method: How to Achieve a Lifetime of Sustained Peak Performance.” The key? Well, he says it’s a diet that’s about 80% made up of fruits and vegetables, many of which are grown right there at his home.

Tom gave CBS’s Norah O’Donnell an exclusive look inside his refrigerator to see just how the all-star athlete eats, telling her that the average meal consists of “a lot of stuff that’s made here at the house. We have a garden out back. So we have, like, a lot of vegetables – like every – all the salads we eat come from our garden and so forth. But just a lot of good, healthy stuff.”

Brady also has a ton of smoothies, he revealed. “I eat a smoothie most of the time. Like a calorie-dense, nutrient-dense smoothie. My ideal one was like a blueberry smoothie with some seeds and some nuts, some electrolytes, some protein powder.” To thicken it, Tom doesn’t use any ordinary cow’s milk but prefers to stick to a more plant-based choice.

“I love almond milk, hemp milk, a little rice milk from time to time,” he says.

Meat isn’t absent from the quarterback’s diet, but it certainly isn’t the focus of his meals. “I’m not opposed to meat, obviously. We have a roast chicken in here. So, like, you know, there’s a little meat. But it’s usually, like, little meat and vegetables; sometimes it’s, you know, like some pasta. It wouldn’t be like a, you know, flour pasta or anything like that but yeah something that’s gonna just keep inflammation down.”

Planning to stay around for a while

Keeping inflammation down seems to be one of the keys to Brady being so successful even though he is one of the oldest players in the NFL.

“I’m the oldest non-kicker in the league,” he told Nancy O’Donnell. “You know, so that’s pretty cool, too. If I can get to 45 and be healthy, then I get to make a decision, but I want to go out playing my best. I wanna go out, you know, playing the sport that I love at a high level and never being someone that is weighing down the team.”

Another key to his success? Lots of water. He says that he tries to drink at least half of his body weight in ounces every single day. “Probably more. Just because – there’s still a lot of, you know, output per day so I’m still losing a lot of fluid. I’d say, like, if you weren’t exercising on a particular day that would be the baseline. I would say half your body weight in ounces. But you have muscle injuries because, you know, you’ve lost so much fluid, muscles are dehydrated, muscles are tight. I try to stay really on top of my hydration. I’m asking my body to perform at the highest levels; I need the highest standards of hydration, too.”

And then, of course, there is plenty of exercises involved. Tom maintains a strict regimen, and according to Bleacher Report, as much as 90% of that includes high rep workouts using resistance bands.

“He works on lower body quickness every day, doing band pulls,” teammate Julian Edelman says. “He has someone hold the band for him to do his knee drives. He’s taken that to heart, to try to improve. He sees all these young guys move around with their legs, and he wants to show them he can do it too.”