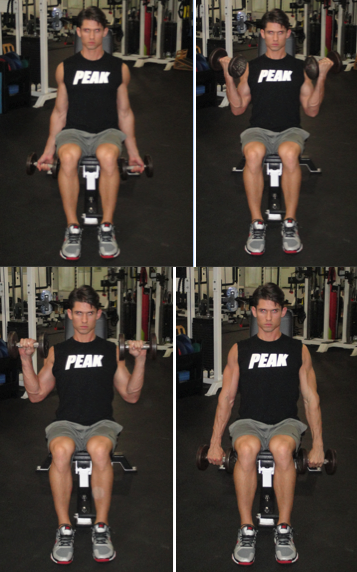 The Zottman curl is a useful accessory exercise that can increase the size and strength of your biceps. Additionally, it can improve your grip strength and wrist stability. This movement can help you prevent injuries and improve performance. This exercise is a great way to increase eccentric strength, which is important for sportspeople.

Performing the negatives in a supinated position

When performing the Zottman curl, use a thick-handled dumbbell or fat grips. You can also perform this exercise seated on an adjustable bench set at 75-85 degrees. When performing the exercise, do one arm at a time, and then switch arms and repeat.

When performing Zottman curls, it is important to use proper form to avoid injury and muscle atrophy. The correct technique requires good coordination and focus. The wrists should be rotated while holding the dumbbells. The palms should face upwards during the movement.

Targeting the forearms during the eccentric phase of the movement

While the Zottman curl is an effective exercise for building arm strength, it can also be an ineffective way to tone your forearms. It can cause injury if performed improperly. It is recommended that you follow proper form when performing this exercise and avoid using heavy weights. Instead, try to use lighter weights and lean against a wall to avoid swaying and jerking during the exercise. This will also take the strain off the targeted muscles.

The forearms are often neglected during weightlifting, especially when training large muscle groups like the biceps and triceps. By training them during the eccentric phase of the Zottmann curl, you will develop more muscle strength in these small groups. In addition, this exercise is much faster than traditional curls, which means you can focus more energy on developing them.

The Zottman curl is one of the best exercises for strengthening the forearms and biceps. This exercise combines biceps and forearms and packs more stimulus into a shorter period of time than standard reverse curls.

Similar exercises to the zottman curl

The Zottman curl combines the benefits of the reverse curl and the dumbbell curl, giving you a complete workout for both the forearms and biceps. Because it uses both of these muscle groups, it packs a more concentrated stimulus into a shorter time frame. This exercise may be more difficult than a Bicep curl, but it is still an excellent choice for those looking to build more definition in their forearms.

This exercise targets the brachialis muscle, which is located just underneath the biceps brachii. It originates halfway down the humorous and inserts just below the elbow on the ulna. This muscle is involved in elbow flexion and is the strongest elbow flexor when a person is not supinating. In addition to strengthening the forearms, it helps develop a strong grip and proportionate arms.

The Zottman curl can be performed with heavier weights, but be sure to control the exercise to avoid soreness. It is best to program three to five sets of five to ten reps with heavy loading.

Is Hyperbolic Stretching Right For You?