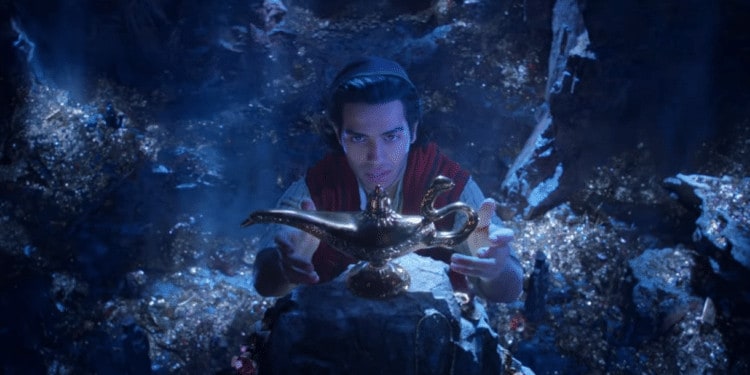 Aladdin reaches for the magic lamp in the cave of wonders (Image Credits: Walt Disney Studios)

“Aladdin” may not be on the list of forgettable Disney productions but with the internet’s reaction to the recent trailer for the live-action reimagining of the classic, it’s probably in a corner sucking on its thumb while worrying about its premiere reception. The internet hate for the upcoming “Aladdin” stems from the sneak preview of Will Smith’s Genie – the beloved magically plot-enabling sidekick so important to the story.

What little of Will Smith’s Genie that we have seen already looks bad – his take missing what Vice’s River Donaghey describes as the representation of “the possibilities of the world laid out before you.” While it may be unfair to compare a snapshot of Will Smith’s performance to Robin Williams’ beloved decades-old take on the “Aladdin” character, it’s fair to say that the sneak peek does not in anyway spark the kind of joy that makes you think of endless possibilities.

With the true verdict of Will Smith’s Genie performance up in the air until “Aladdin” actually gets released on May 24, all hope is not lost. Below are a few things to look forward to that can hopefully surprise us no matter what our age is when “Aladdin” finally comes out.

Iago. Abu. The magic carpet. The palace guards. None of these iconic characters from the original 1992 adaptation were featured more than a few seconds in the new “Aladdin” trailer. The trailer may have leaned heavily on revealing Will Smith’s Genie to generate some buzz but the “Aladdin” franchise itself has more memorable characters that can hopefully overshadow the bad press that Genie is getting now.

It can be argued that Gilbert Gottfried’s portrayal was just as important to the comedic experience of the original “Aladdin” as Robin Williams’ beautiful performance. But with what we have in the trailer, we’ve yet to see if the upcoming “Aladdin’s” own Iago – who weirdly has yet to have a voice cast – is given as much attention as Will Smith’s Genie.

“Aladdin” is no stranger to controversies. The whole “Will Smith is horrible as the genie” issue is pint-sized compared to the racial tension issue that the original animation encountered during its release in the ’90s.

With the “Aladdin” live-action remake, Disney has a chance to address the alienating Arabic-oriental stereotypes that the original movie may have reinforced while putting talented actors like Mena Massoud and Naomi Scott front and center of the public’s attention. Will Smith’s Genie may seem offensive to our childhood senses at the moment, but hopefully the upcoming “Aladdin” is inclusive for all.

If it tanks, Disney might rethink what made their original animations so good

Let’s face it, the actual reason why we’re even getting a remake of “Aladdin” – and “The Lion King” – is because Emma Watson’s live-action remake of “Beauty and the Beast” was such a stellar success in 2017. That movie is filled with computer-generated characters significantly outshined by their animated counterparts much like Will Smith’s Genie but it still took the box office by storm.

As much as we love and miss Robin Williams’ chameleonic portrayal of the friendly blue magic man, maybe – just maybe – he’s not what makes the story of “Aladdin” a timeless tale for the generation younger than us.

How to Properly Bleach Your Beard