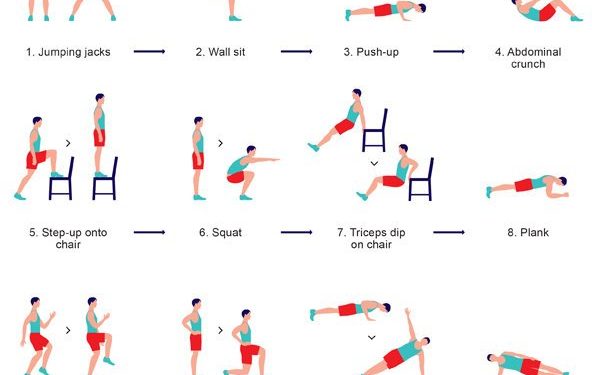 Not everyone has a full hour to devote to the gym every day, but science says that with this new 12 step work out, that’s ok! It only takes seven minutes to complete, but if done right it can give you a full body burn that even some of the best gym routines can’t match.

Based primarily on interval training, this series of short but effective exercises starts out with simple jumping jacks, then sees the user transition to wall sits, pushups, crunches, step ups, squats, tricep dips, plank, high knees, lunges, rotating pushup and finally a side plank, all one after another in quick succession.

The routine was first published in the American College of Sport’s Medicine’s Health and Fitness Journal, where its author stated you should allow “30 seconds for each [with a 10-second rest between exercises], while, throughout, the intensity hovers at about an 8 on a discomfort scale of 1 to 10, [director of exercise physiology at the Human Performance Institute] Mr. Jordan says. Those seven minutes should be, in a word, unpleasant. The upside is, after seven minutes, you’re done.”

The key to success here is the fact that the exercises alternate back and forth, working the muscles of the upper body, then the lower body, and then back up again. This gives the muscles some time to breathe between their exercises but doesn’t let enough time elapse for them to cool back down. Because of this, we should note, that the order of the exercises is especially important, and rearranging them can lead to a significantly less effective workout.

These kinds of short, high-intensity exercises, according to scientists, are actually among the best that we can do for ourselves because they impact us on a molecular level, believe it or not. Scientists studying this kind of training at McMaster University in Ontario, Canada, have discovered that “a few minutes of training at an intensity approaching your maximum capacity produces molecular changes within muscles comparable to those of several hours of running or bike riding.”

Another study, this one from Aberdeen University in Scotland, also proved the benefits of high-intensity exercises, uncovering the fact that just two minutes of a high-intensity workout can have the same effect on our body as running 90 minutes at a moderate pace. Think about that for a second. Rather than wasting a full hour and a half period of our day, the length of the average movie, we could instead spend just two minutes and see the same results. But that’s not all that the researchers at Aberdeen figured out.

The Scottish study also found that participants who performed just five minutes of a high-intensity exercise prior to eating a high-fat meal were seen to have lower levels of fat in their blood compared to participants who ate the same meal but instead went for a half hour walk at a moderate pace. This, the scientists explained, was most likely due to the fact that high-intensity exercises actually encourage the life to kick into overdrive, in a sense, and to absorb more fat from the bloodstream before using it. So beyond just working your muscles, it is also working out your inner organs too.

With so much scientific literature and hard research attesting to the value of this kind of workout, it is easy to see why so many people have begun to use it themselves and have seen some real results. And with it only being seven minutes long, no one really has the excuse as to why they can’t work out. The old “it takes too much time” go-to now flies out the window, and the only reason to not get in shape and make use of this routine is simple laziness. So don’t be lazy and stop making excuses, and get up and start your seven-minute exercise.

Oh, and, just to be clear, none of the steps in this routine require and kinds of equipment whatsoever. The only things you need here are your body, a chair, and a wall. So don’t try giving us that excuse that you can’t afford the equipment either!