Jamie Lee Curtis signs on for one more Halloween film 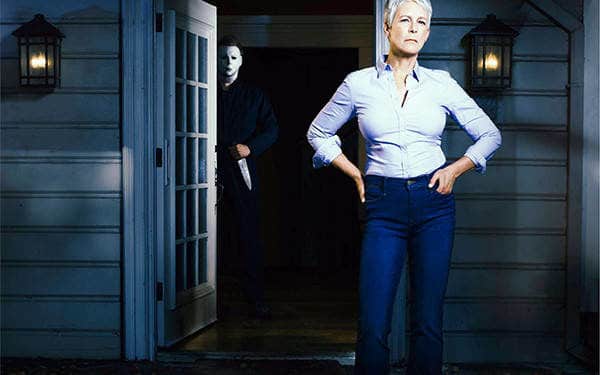 Horror heroine Jamie Lee Curtis has announced that she will be reprising her role in the classic slasher Halloween, posting "Same porch. Same clothes. Same issues. 40 years later. Headed back to Haddonfield one last time for Halloween. Release date 10/19/18" on her Instagram account, along with a promo photo showing masked murderer and movie icon Michael Myers peering ominously at her from a doorway.

The news was immediately met with enthusiasm by fans of the franchise, who had their hopes confirmed when Blumhouse, the production company behind the reboot, posted a tweet of their own stating "Jamie Lee Curtis returns to her iconic role as Laurie Strode in HALLOWEEN, released by Universal Pictures October 19, 2018. #HalloweenMovie"

Curtis first graced the silver screen as Laurie Strode back in 1978, and plans to reappear in the role for the films 40th anniversary. The actress also reprised her performance as the character for the franchise’s 20th anniversary, when she appeared in 1998’s Halloween: H20.

As if that wasn’t enough to get horror fan’s blood pumping, it was also announced that the original director of Halloween, John Carpenter, is slated to produce the film, and David Gordon Green of Pineapple Express fame has been tapped to direct.

Green and Eastbound and Down‘s Danny McBride are also reportedly behind the scriptwriting, leading to even more anticipation as horror fans watch to see what the two come up with, and how well their story can fit in with the rest of the franchise’s canon.

John Carpenter seems to think that the pair will do a good job with the task at hand, and commented on his Facebook page about the new project saying "David and Danny will write the script together and David will direct.

I will continue in my executive producer role to consult and offer my advice and feedback as needed. David and Danny both came to my office recently with Jason Blum and shared their vision for the new movie and… WOW. They get it. I think you’re gonna dig it. They blew me away. I might even do the music. Maybe. It could be kind of cool."

Jason Blum, the man behind Blumhouse Productions, is also no rookie to the horror genre and is the mastermind responsible for Get Out and Split, among many others, as well as the highly successful Paranormal Activity, Purge, and Insidious franchises.

This will make for the eleventh installment of the fabled franchise and will mark Curtis’ fifth appearance in the role of Laurie Stroud, and the seventh time the character has made an appearance in the movies (Scout Taylor-Compton played stroud in Rob Zombie’s two Halloween remakes). Curtis also paid homage to her horror persona in her most recent role on Fox’s horror comedy Scream Queens.

Apart from setting the social media world on fire with the announcement, many more serious film critics remain hopeful that the new film can give a reboot to the slowly dying slasher genre.

It’s been several years since a serious attempt at a movie of this sort has been produced successfully, and the last Rob Zombie remake, while not a terrible movie in its right, was disappointing enough to turn fans off from another Halloween for nearly a decade.

There is a great deal of hope that a return to some of the original cast, as well as the influence of such a powerhouse production house and director, can be just what is needed to turn around that downturn, and to bring the latest Halloween back to its roots, giving another movie to grace the hallowed halls of the Horror Hall of Fame.

And, despite the roller coaster ride of hits and misses that the franchise has seen over the course of its last ten films, Halloween has done pretty well for itself over the years, grossing nearly a half billion dollars internationally throughout its lifetime. This latest installment, it is hoped, will add significantly to these earnings, and will help the franchise to continue to terrify another generation of moviegoers for years to come.

For now, however, all we can do is wait for 2018, and prepare for what looks to be the final installment of one of the most legendary film franchises in movie history.

Jamie Lee Curtis signs on for one more Halloween film