The Benefits of a Carb Free Diet 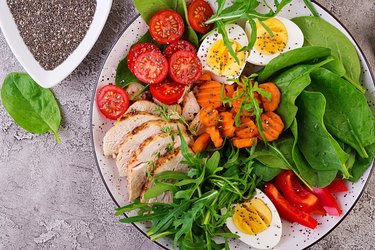 A low-carbohydrate diet is a diet that restricts carbohydrates in the diet. It replaces high-carbohydrate foods with foods that are higher in fat and protein. In addition to weight loss, this diet improves the mental state of its followers. It may not be the most appealing diet for everyone, but for many people, it has proven to be an effective way to lose weight and improve health.

Low-carb diets are an excellent way to reduce your carbohydrate intake, which is one of the major contributors to weight gain and increased risk of cardiovascular disease. These diets also promote weight loss and have numerous other benefits, such as improving mood and mental performance. Many studies have shown that low-carb diets reduce the risk of heart disease.

When choosing a low-carb diet, you should look for foods that contain low-carb content. For example, cauliflower rice contains less than half the carbohydrates found in regular rice, and is a great source of fiber. Almond flour, meanwhile, contains only 57 grams of carbs per serving and is high in healthy fats.

Another benefit of low-carb diets is that they can help stabilize blood sugar levels, reduce hunger, and improve mood. Low-carb diets have also been shown to help people lose weight in a natural way. These diets are often paired with other lifestyle modifications, such as yoga. You can also try a carb-cycling plan in which you alternate low-carb days with high-carb days.

Diets low in carbohydrates have been shown to reduce ghrelin, a hormone related to hunger. It is secreted by the stomach and acts as a signal that urges the body to eat. Studies have found that reducing ghrelin levels can decrease body weight. However, they cannot prove causality.

One study compared dietary fat and carbohydrate-free diets. The researchers found that a higher dietary fat intake had no effect on ghrelin concentrations, while a lower amount of carbs had a small but significant impact. Similarly, the ratio of protein to fat did not change significantly.

Several studies show that higher levels of ghrelin are associated with weight gain. While the mechanism is unclear, the hormone acts on the hypothalamus, which regulates hormones and appetite. Generally, a high level of ghrelin makes you feel hungry and craving for food, while a low level makes you feel full. Lowering ghrelin levels can reduce the urge to eat, a beneficial effect for losing weight.

However, it is worth noting that the hormone ghrelin has been linked to obesity and chronic stress. This is because chronic stress raises ghrelin levels, which are linked to weight gain and obesity. Moreover, when dieting for the first time, it’s normal to lose fluids and become dehydrated. Dehydration can confuse hunger with thirst, which can increase your appetite.

Carbohydrates are a major source of dopamine and serotonin, two neurotransmitters that are critical for our well-being. An imbalance of these two can have harmful consequences. An over-production of serotonin can cause anxiety or depression from over-stimulation, while excessive levels of dopamine can cause bipolar disorder, aggression, and schizophrenia.

How to Walk Faster With Your Arms at Your Side

What Is the Mediterranean Diet?