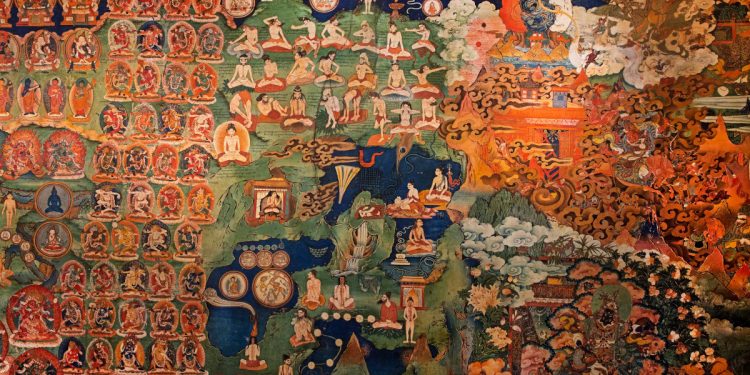 Here we’ll explain the basics of Tummo, share scientific findings, and give some personal advice.

Tummo (also spelled Tum-mo, Tumo, gTum-mo, or g-tummo) is a meditative practice of Vajrayana Buddhism (also known as Tantric Buddhism) and Bon. It uses meditatio and breathing to generate and guide an inner energy which may express itself as physical heat. To truly understand Tummo, we must understand Tantric Buddhism.

Vajrayana is one of the three great Buddhist “sects.” It’s predominant in Tibet and Mongolia and may be most famous for being led by the Dalai Lama. It maintains a more secretive, active, and forceful philosophy. In fact, it’s known to permit or actively encourage the use of sexuality in meditation, though practices vary greatly. Essentially, it allows more freedom in the ways one can attain enlightenment.

Little can be said for certain about Tummo, since pure teaching can only be given personally from master to pupil. But the very spirit of Vajrayana is to only do what works, regardless of established norms, so there’s always the calling to discover for oneself. Still, these traditions aren’t anything trivial, and we have to acknowledge our ignorance about most of them.

Some initiated monks have however come out with a few of the traditional teachings. They believe that the rapid decline of traditional knowledge in modern times justifies this act, one that would normally be counted as a violation of vows of secrecy.

Using these instructions, ancient texts, and modern experimentation, enthusiasts might be able to start off with some basic ideas and goals.

We’ll start with the breathing. You can do this either gently or heavily. Gentle breathing should be slower than your normal breathing rate. You may find that you’re able to go more slowly the further your meditation progresses. Heavy breathing is of course more intense. You will spend more time inhaling than exhaling, and you can put your voice into it to get a more resonating effect.

Your gut can take two positions. You can project it and your pelvis outward, imagining it as a sort of energy center, or you can suck it inwards towards your chest. One blogger recommends closing your nose and “breathing” inward to get it as far in as you can. While in the first case it is as if energy is being concentrated, in the second it is as if you are pushing it upward or allowing it to descend downward.

Before, during, or after your breathing, you may hold your breath to kindle a greater intensity in your practice, balance out your system after taking in more oxygen than usual, or as part of lowering your overall oxygen intake, which is one of the goals and effects of long-term meditation.

While you’re doing all this, you have to set your mind to work. This isn’t the napping which most meditation classes seem to be today.

If you want to generate heat, you might imagine your body as being hollow. With each inhale, a fire or glow grows within you, ascending gradually higher. Depending on your intentions or mood, you might imagine your body taking other forms. If you take an interest in gods or spirits, see these intently, identifying with them. If you desire to master sexual energy, see what arouses you, controlling it rather than being carried away by it. This last option is obviously the most intense, giving the most immediate results to your energy, but it’s the most risky as well.

If you breathe intently and keep discipline and focus through it all, you will definitely feel something by the end. This isn’t the sort of thing you “don’t feel” afterwards. Energy, confidence, and self-knowledge will arise naturally.

Beyond all this, blogs, texts, and instructional videos will be your best guides. Oh yeah, and we have irrefutable proof that all this works.

Regarding Tummo, a few studies stand out above all others. One series was done among the monasteries of the Indian Himalayas, and the other was done likewise in Tibetan China and later in France, using Tibetans and Westerners alike. Both measured temperature and mental activity, and their results happily agreed.

It was found that extremities (fingers, etc.) experienced extraordinary temperature increases of up to 21 degrees. Core body temperature didn’t change very much, but some meditators were able to enter fever temperatures. This might sound unhelpful and dangerous, but remember that these people often live in harsh, cold conditions. What was most impressive was instead that they kept their body temperature slightly higher while wrapped in cold towels causing them to steam and dry.

Mental activity also increased, with the brainwaves most associated with alertness having the greatest increases. One study found that the opposite hemispheres of the brain were actually affected differently, suggesting a more complicated picture of mental activity.

Forced breathing with meditation accomplished the greatest results, but it couldn’t be sustained for long. Gentle breathing tended to keep the body temperature slightly elevated for long periods of time. Meditation had little overall effect on the body, but it certainly helped, and it had a strong impact on mental results.

The most shocking statistic to come from this was that one meditator in one study was able to reduce his metabolism by 64%. For comparison, sleep only reduces it by about 13%. It’s almost unbelievable. This gives further proof to the claim that advanced meditation can healthily replace hours of sleep.

There are certain risks which we can’t overlook. Reports of gastric problems and joint pain are common but, as with any exercise, these may be lessened or removed with practice. If a beginner runs into intense difficulties, they might tone down their practice and focus on recovery for a while. All practitioners must always ask themselves what they have gained and what sacrifices they have made for it.

The body and mind contain a potential for energy which is most often wasted. Individual needs and abilities vary greatly, but every disciplined mind can reap power from diligent practice.

6 Bad Bathroom Habits That Are Hurting Your Health & Environment

Are Swai Fish Actually Bad for You?