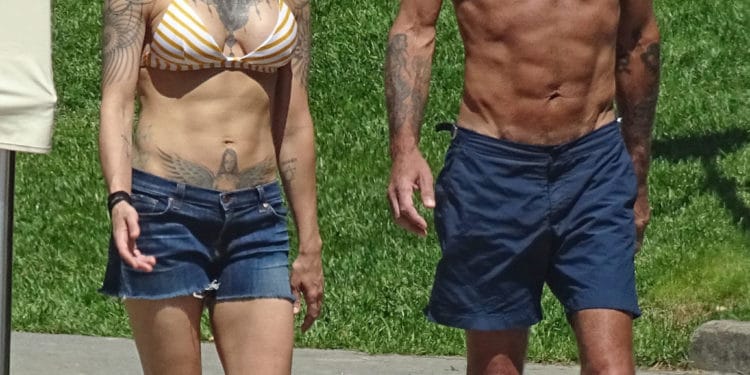 Celebrity chef Anthony Bourdain is a man who knows food. The man’s whole life revolves around creating and tasting some of the best food from all over the world, so how is it that, despite all of that eating, he can maintain such a good physique?

Most people didn’t even realize the 61-year-old was in such good shape until he was recently spotted shirtless with girlfriend Asia Argento in Italy, leaving many in awe of the near-seniors near-perfect body. So what’s the key? Well, Anthony Bourdain claims most of it comes from Brazilian jiu-jitsu.

Last year, the world-class chef told interviewers that he trains at the sport nearly every day, no matter where on earth he may be. IT is so important to him, in fact, that he told Yahoo Sports that it is something he thinks about before he puts together a shooting schedule.

In a 2015 interview, he told them “as I make the shooting schedule and put together a list of destinations, in the back of my mind I’m thinking ‘Can I train when I’m there?’ and if it is a place where they do have an academy, I try to arrange my shooting schedule so if I can wake up very early in the morning and go roll for an hour or two; I will.”

His primary training spot, however, is in New York City, at the prestigious Renzo Gracie Academy. “An hour private and then an hour and a half general population. That’s Fight Club,” he told reporters about his workout routine there. He also mentioned that he avoids using weights or machines, preferring to stick to bodyweight and cardio to get into fighting shape.

But Bourdain doesn’t only use jiu-jitsu to look good, he also actively competes at competitions across the planet. “I have had my ass kicked everywhere in the world. I am a 60-year-old blue belt who doesn’t suspect he will ever make it to black belt in this lifetime,” he told Men’s Journal last year.

There is also a certain kind of emotional satisfaction attached to mastering the sport as well. As he says “tiny incremental satisfactions of being a little less awful at something every day” really help him find the drive and motivation to get up and get into the gym every day.

Just because Bourdain decided to take up Brazilian jiu-jitsu at a later age doesn’t mean that it is for everyone. “It’s easily the hardest thing I’ve ever done in my life. It’s certainly the most challenging physically ever,” he says. It is exactly that kind of challenge that he seems to enjoy, however, saying ““I like the fact that it’s a steep and endless learning curve. And that it’s a hard thing.”

He was introduced to the sport in 2014 by his then-wife Ottavia, who was herself a Brazilian jiu-jitsu professional. This decision to take up the sport, combined with his giving up carbs and sugar, allowed him to drop nearly thirty pounds in only nine months.

And his other secret? He has begun to cut back on his alcohol intake. “I’m not drinking anywhere near what I used to, and I’m much moderate in my eating habits — because you really pay the price for misbehavior immediately on the mat,” he said in 2015. “You feel it, and you pay the price in physical pain and humiliation.” That doesn’t mean he has given up drinking altogether, however, and Bourdain says that he still enjoys a good glass of whiskey, but it is nowhere near the levels that it had been only a few years ago.

Bourdain isn’t the only one who has been using jiu-jitsu to stay in shape either. Recently, Demi Lovato has come out saying that she too participates in the sport to keep herself in shape, and one man even used it to shed an astonishing 257 pounds over just four years.