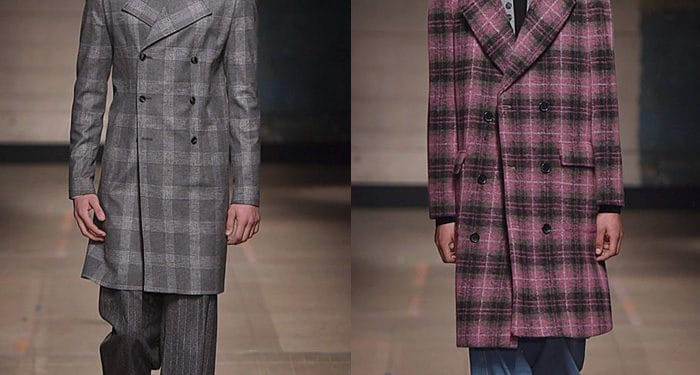 Summer is almost gone, probably a few weeks left to get out and soak up some sun and splash around in the pool before the weather turns on us.

I know it’s a tough nut to swallow, but come October you’ll be looking at wool sweaters, parkas, and umbrellas. You don’t need to chuck your entire closet in the trash just yet, but some updates are probably going to be required if you want to be cutting edge.

The fall/winter 2017 shows wrapped up almost a year ago, but in case you didn’t catch any, here are some highlights for you.

Orange remains a dominant force in men’s fashion as design houses Givenchy, Damri dome, and Dior Homme was mad about the bad cousin to red. Giving us everything from jumpsuits to overcoats, orange is shaping up to truly be the new black.

It would appear that war and conflicts in the Middle East have been on the mind’s of more than a few fashion designers as we saw military inspired looks from the likes of Moschino and Balmain. While camouflage and green were expected, the big black ISIS inspired puffer coat by Vetement’s was unexpected, to say the least. Believe it or not, pleated pants were all over Men’s Fashion Week, both here and abroad. Hugo Boss, Lemarie, Marni and JW Anderson were all over the 90’s inspired slacks, but don’t invest too heavily – we’ve seen this show before.

While orange is the leader, red isn’t far behind, and we saw the scarlet color in suits as well as sportswear for 2017/18. Prada and Fendi weren’t the only ones who returned to the 70’s; they were just most pronounced. The duo gave us grampa’s cardigan, fur and leather coats as well as corduroy all in a sea of brown hues.

For fall/winter, we saw a return to those retro 1980’s double breasted suits. Some went long, some went short, some went baggy, some went fitted – in other words, someone threw the rule book out the window, but double breasted was the story, and you should probably invest – they aren’t going anywhere for at least a couple of seasons, probably more. I had one tailor-made a year ago.

I stuck with a slim fit European cut and you should too. Super boxy and baggy might be in vogue this season, but by next year it will look like you just rolled out of bed in your suit – not that you wouldn’t now.

Peak lapels are most common, but we are beginning to see notch lapels for a nice change to the double breasted. Patterned suits have been the rage, and that trend is alive and well in 2017. From checks to plaids, prints dominated the runway. However, one designer took the concept of pattern mixing to a whole new level, Paul Smith. Paul Smith’s collection for fall/winter 2017 was my favorite of the season. The designer always puts together comprehensive compilations of ideas and for the upcoming season, Smith went slightly retro with tartan, gingham, and Glenn plaids. Tartan dated back centuries and was originally seen in Scotland.

Smith uses the Scottish pattern in his loose fitting suits and trousers. Raincoats with huge lapels over brightly colored horizontal striped sweaters had a definite 70’s vibe written all over it as did his patch work leather coats with shearling lining.

We were also treated to splashes of blue and black velvet in suits and overcoats. The British designer wants men to forgo the stuffy plain dress shirt and instead go with a paisley print – I can see it. Sir Paul gave the nod to the west by incorporating snakeskin cowboy boots in his fav color to top things off.

For the shopper: invest in one double breasted suit or sports coat preferably in bold print. Stock up on green and orange – you can wear these together. ‘Retroize’ your wardrobe by incorporating a couple of 70’s inspired pieces – don’t go overboard unless you’ve got money to burn.

What Should You Eat Before Your Workout?​