Coney Island is a legendary spot for a damn good reason. 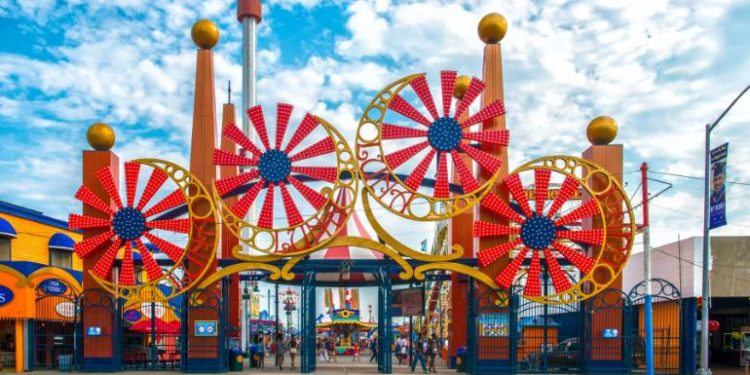 Even as a self-proclaimed New Yorker, it took me a while to figure out exactly what it was about Coney Island that spoke to me (and millions of other New Yorkers and tourists alike) so directly. What is it about this boardwalk in particular that felt so magical, so interesting, so inspiring, even freeing.

After visiting a few times and it over everytime I go, I’ve landed on possibly the most millennial, but never the less correct, answer I could have come up with: spirit. Coney Island has an indomitable spirit about it that has persevered through the years, getting off that train and walking into the boardwalk is exactly the same today as it ever has been. 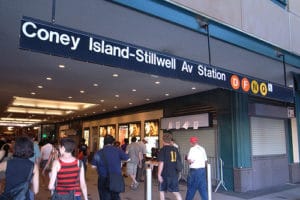 This means you’re having the exact same experience people have had coming to Coney Island since 1895. As you stride that boardwalk, you’re a successor to the to the century-old tradition of visiting “heaven at the end of a subway ride” (as it was described back in the day), also know as the “poor man’s paradise”.

It earned these clever little monikers from a lot of particularly unique (at the time) features that the area offered. An individual or group of individuals had the ability to lease a space to set up their own attraction, meaning people from far and wide were drawn to Coney Island for either the experience or opportunity. You could do any damn summer thing you could think of there, whether you were broke or affluent, it was all the same to Coney Island. 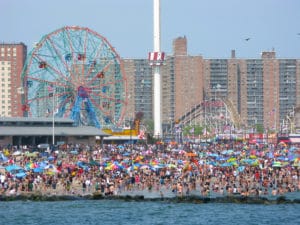 These days, the experience is mind-bogglingly intact. Vendors and attractors from all around have set up shops along a beautiful beach-side boardwalk. Here I’ve put together a list of the things you and everyone else wants to do at Coney Island whether you know it or not.

As you walk along the boardwalk, you’re visually treated to an array of amusements both ancient and new as you people-watch, grab a hot dog, check out the ancient Cyclone roller coaster, pass the New York Aquarium, all the way down to Brighton Beach. Still, an extraordinarily Russian neighborhood that will feel make you feel like you slipped into another place altogether.

As you go, you’ll pass Luna Park, another ancient piece of juicy city lore you’re probably not totally aware of. Originally opened in 1903, it was home to the most original and sought after amusements in the country, deeming itself the hear of Coney Island. It originally opened at precisely 8:05 pm on May 16, 1903, timing its grand reveal with the sunset on that Saturday to 60,000 spectators.

Earlier I mentioned that just about anyone who had some cash could set up shop around here, and they did. Competitors shot up left and right after the success of Luna Park, and continued to compete with them right up until The Great Depression, which eventually saw to the end of the old Luna Park. 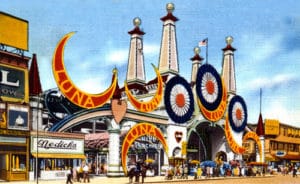 Fast forward to the opening of Astroland, a space-themed…well, theme park, opening in 1962 to a similarly large viewing. Due to some complications about ownership of the amazing Astroland that I won’t get into because it’s comparatively boring, eventually, it closed in 2008. At some point, Astroland was bought and re-opened as the new Luna Park, which exists to this day, and features a replica of the opening gates of the original version opened in 1903. Pretty cool right?

Ride The Cyclone Before You Leave 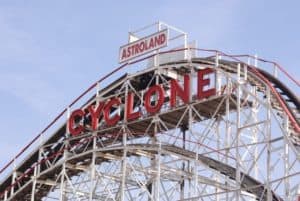 Through all of this, one structure stands the test of time, still standing with many of the original pieces that crafted it, made entirely of wood and horror, is the Coney Island Cyclone.

Declared a New York City landmark in 1988, the Cyclone is as terrifying as it is fun and remains one of the only structures that have existed and operated throughout the existence of Coney Island. Opened in 1927, the ride wobbles and screeches the same as it ever did, and remains as a testament to the durability of Coney Island itself. Personally, I see it as the true heart of the town, a metaphor for the indomitable spirit of amusements.

I’ve taken a ride on the Cyclone myself a couple of times, each time surprised at the array of emotions you experience strapped into that still wooden death trap. The first of all of them being “I wonder if I’ll survive this” followed by “Wow, you have a really great view of the whole place from up here” followed then by “I wonder if I’ll survive this.”

After these thoughts rush by, one in particular always hits me pretty hard. I realize how much fun everyone on the ride is having, how much joy amusements like this bring people. Then, when back at the highest peak of the Cyclone as I’m look over the entirety of Coney Island, I can’t help but think of the effect a century of bringing joy to people must have on a place. A thought followed immediately by “I wonder if I’ll survive this” and how many other people have thought the exact same thing, in this exact same seat.

A Guide to The Best Bicycles For The City