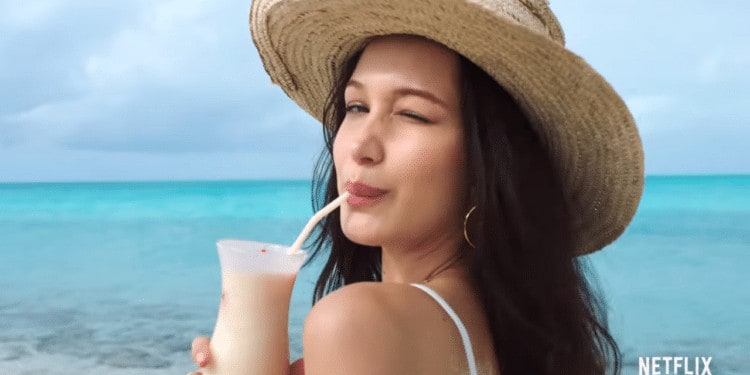 A model slyly winks at the camera while enjoying the Bahamas in Netflix's Documentary (Image Credits: Netflix)

Since the weekend is back, it’s time for us to unleash our weekly Netflix wrap-up – the article where we take 5 Netflix shows, watch them until our data runs out, and provide short summaries so that you can quickly choose what you want to binge on for the next couple of days.

Our previous wrap-ups and binge recommendations focused on a lot of action, thrillers, and cartoon comedies to keep that binge train chugging. This round, we’ve got some science fiction, horror, and another documentary to fill your weekend so take your pick and keep binging.

A mind-bending series from Amy Poehler. While “Russian Doll” starts off as a quirky comedy that immediately turns into a roller coaster psychological thriller as each episode progresses.

If you enjoy catching up with a show to figure out exactly what’s happening to the protagonists, “Russian Doll” is the perfect show for you. Much like its title, “Russian Doll” slowly unravels each piece of the puzzle and satisfyingly ties things up for attentive viewers.

An adaptation of George R.R. Martin’s 1980 novella of the same title, “Nightflyers” follows a team of scientists who have contracted the services of a colony ship to make contact with an alien race at the edge of the known space. The crew is beset by problems both psychological and some which appear to be supernatural, putting the fate of their mission at stake.

If you’re a George R.R. Martin fan who loves the fact that his characters can be noble and selfish all at the same time, “Nightflyers” will be an enjoyable experience. There are still “What the hell, protagonist??” moments throughout the show but they are eventually revealed into a coherent narrative that gives a sense of thrilling unease.

“Nightflyers” is a series that’s slow to set up its story elements. It definitely picks up faster by episode 3. Unfortunately, with only 10 episodes available for season 1, “Nightflyers” may not be the thing for people looking for a quick binge.

A star-studded cast dives deep into the cut-throat world of contemporary art with a thrilling premise: Just how much of an artist’s rage can get put into their work? Both funny and horrifying as those who have to deal with the works of Ventril Dease are slowly ground down by their industries’ worst practices as well.

If you like a bit of a laugh with your horror, watch this. Fans of “The Frighteners” will enjoy the whiplash between comedy and horror.

Sam Walden (Margaret Qualley) still believes that the Earth can be saved by bees from toxic air, even when most of humanity has already relocated to Io – one of Jupiter’s moons. The film’s premise is balanced by the arguments about saving the Earth or leaving it behind between Sam and Micah (Anthony Mackie) – another survivor on his way to the last shuttle off Earth.

If you’re looking for pure pro-Earth rhetoric with a dash of Nicholas Sparks-inspired romance to keep things sizzling, “Io” is probably good enough to include in your to-watch list.

If you’re looking for an actual science fiction film, don’t touch “Io.” The premise about bees is preposterous and no one ever actually does anything to solve any problems. “Io” is an emotionally manipulative movie in the trappings of sci-fi but even then, it’s not good at manipulating emotions to make viewers agree with it.

This documentary follows the trail of the infamous Bahamas Fyre Festival that was organized by Fyre Media Inc. CEO Billy McFarland, and backed by Ja Rule. The event was such a catastrophic disaster in execution that it never actually started and had a number of high-profile celebrity influencers covering their butts for promoting the event in the first place.

If you want to see how the biggest music festival scam crash and burned due to its own weight while screaming “HOW COULD YOU NOT SEE THIS!?,” “Fyre” is the perfect binge choice for you.

The only reason to ever watch anything else other than “Fyre” is because you’re in the middle of watching another series. If not, make sure it’s on the top of your list.

These Fashion Trends Are Making a Huge Comeback in 2019