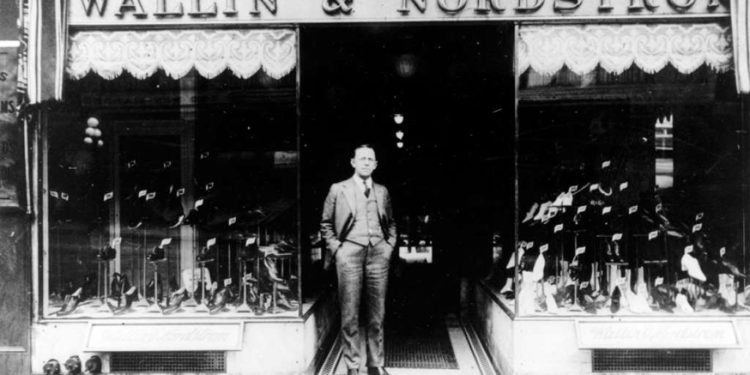 When you hear the name Nordstrom, what comes to mind is outstanding customer service and they wouldn’t have it any other way. In fact, that was the bases for the company when they were a small retail shoe store based in Seattle. If you bought your shoes from Nordstrom, you could return them with no questions asked; a policy which they have to this day. Founded by John W. Nordstrom and Carl F. Wallin in 1901, they have seen a massive expansion in the past 115 years.

Since the introduction of womenswear in the 1960’s, Nordstrom has been a leading fashion retailer in the United States. Now in their 4th generation, it’s a family affair as Nordstrom brothers Erik, Pete and Blake were named co-presidents in 1995. Between 1997 and 1999 Nordstrom added another 10 stores to their roster and by 2000, there were a total of 77 full-line stores and 38 Nordstrom Rack stores. Now, in just 16 years, Nordstrom has opened an additional 44 full-line stores, 160 Rack stores and plans to open an additional two Racks were announced at the beginning of January. The retailers latest venture is HauteLook, “We acquired HauteLook in 2011 to participate in the private sale marketplace and also as a platform to increase our own innovation and capabilities around how we serve customers,” said Dan Evans, PR Director for Nordstrom. “HauteLook also provides us another avenue for growth. In 2014 we launched Nordstromrack.com by leveraging the talent of our HauteLook team and their strength in the online, off-price business, to build a fast, seamless online and mobile experience.” In the past several quarters, Nordstromrack.com and HauteLook have been their fastest growing business and in the fiscal year, 2015 sales increased by 47 %.

Both Macy’s and JC Penny’s have shut down stores in recent years, but while others are being forced to close their doors, Nordstrom is thriving,“It’s tough out there in our sector of retail. We are holding up pretty well, but the pace of change is incredible,” said Pete Nordstrom, the retail giant’s co-president, and current director. “We will be a survivor for sure and likely we will thrive. Can’t say the same for some of our traditional mall-based brick and mortar dominant peers.”

Nordstrom realized early on that having an online presence was going to be key if they wished to compete, “We’ve made significant investments to enable customers to shop seamlessly across stores and online as well as to grow our business through new markets,” said Evans. “Our e-commerce business including Nordstrom.com, Nordstromrack.com, and HauteLook has grown from approximately 5% in 2006 to nearly 23% of total company sales.”

While the company’s latest venture, Trunk Club, took a nearly 200 million loss, it’s not unusual for these types of dot-coms to take serious hits out of the gate. According to Fortune, Nordstrom’s overall performance remains strong and shares soared 8% after its third-quarter results were disclosed. The company reported adjusted earnings of $0.84 per share, well above analyst expectations of $0.51. Revenue rose 7.2% from a year earlier to $3.54 billion, beating $3.48 billion expected by Wall Street. Nordstrom currently operates just 123 full-line stores (five of which are in Canada. Unlike Macy’s rush to shut down their brick and mortar stores, a dip in sales hasn’t scared Nordstrom as they have only closed two stores. During mid-2016, Nordstrom closed one store, at Westfield Horton Plaza in downtown San Diego. The company has three other full-line stores in the San Diego metro area. Then in March, the company shut its location at the MainPlace Mall in Santa Ana. They retain a strong foothold in the state of California with six full-line stores in Orange County alone and more than a dozen in the greater Los Angeles region.

Nordstrom will break ground in the retail capital of the US when they set up shop in New York in 2019. It’s a massive undertaking as the store will encompass four properties in the Columbus Circle neighborhood of Manhattan along Broadway between West 57th and West 58th Streets.

“We’re building in the context of the world’s greatest stores in the best retail city in the world and our ambition is to create an entire experience that reflects the best of what we have to offer,” said Pete Nordstrom. “We think the modern exterior glass design combined with the historical renovations honor both the past and future of Manhattan. We look forward to the day when we can open our doors and welcome customers,” he added.

The company’s annual earnings were at a record high in 2015 as the hit the $13 billion mark which made investors leap for joy. Nordstrom is poised to be the biggest fashion retailer in the world and now with a successful e-commerce presence, their future is looking brighter than it has in decades.