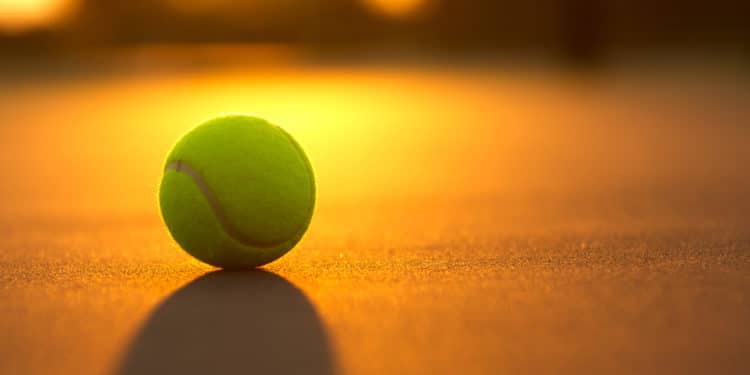 Tennis Ball on the Court as the Sun sets

What’s the first thing you think of when you hear the word “Tennis”? A lot of things come to mind, from the rackets themselves, the oddly good-looking men and women that compete professionally in the sport, or the neon highlighter yellow tennis balls the sport is so well known for, or the way these athletes dance around the court for hours per match seemingly without effort. Personally, and perhaps strangely, it’s always been the fashion of the sport. What other sport has such a fashionable style and hypnotic pace?

Odds are you’re trying to find more ways to get out of the house and into some the beautiful weather we’ve been getting, and what better way than to pick up an new sport? Tennis is surprisingly easy to get into playing, and you’d be super surprised at all the reasons more legitimate than the shallow reasons I listed above (and stilly vehemently believe in). Let’s cover just some of the reasons you ought to pick up a racket this summer.

Many studies have been done by many a scientist to come to the conclusion that tennis is the “the sport of a lifetime”, but what exactly makes that so? For one, (the late) Dr. Ralph Paffenbarger, once an internationally recognized authority on exercise, has said “People who participate in tennis three hours per week at a moderately vigorous intensity cut in half their risk of death from any [natural] cause.”

This is largely because playing competitive tennis burns more calories than doing your basic aerobics and even more than cycling. Tennis demands a certain amount of alertness and constantly thinking in a tactical funnel, forcing your mind to command your body in order to coordinate the racket in your hand to make contact with that ball. It may even generate new connections between nerves in the brain, promoting continuing development not generated by typical workouts, a study from the University of Illinois tells us.

There’s also an insane amount of mental health benefits from playing the game; studies show that Tennis players score higher in vigor, optimism, self-esteem, scoring lower in depression, anger and confusion. Just think of the physicality of the game, concentrating on your footing and measuring the angle and power of each time you connect with the ball. What’s left in you to be upset about, right? Think of it as active meditation.

It’s Cheap and Easy to Get Into

You can grab a tennis racket for as low as 15 bucks, just to get started. All you’ll really need is a couple of those and tennis balls. Looking for a court? You might be surprised to find out that there are over 250,000 tennis courts in the U.S. to support what recent polls indicating that over 28 million Americans casually drop in for a tennis match. Odds are, you can easily find somewhere to play without joining a gym or some sort of country club. But they have those too.

Tennis clothes? Now personally, I think this is the most important part. I need the headband, the shoes, the shorts, the polo shirt, possibly a visor. The fashion and sophistication of tennis is one of the extremely attractive reasons that I’m personally attracted to the sport, aside from the bevy of health benefits, but it’s not a requirement. Old gym clothes are fine! You don’t need to buy any items aside from the balls and rackets to get started, so why not give it a try?

While people sometimes play tennis alone, for practice or because their partner isn’t available (they play against a wall I assume…?) one of the biggest things tennis can offer is connection. Much like a game of chess, tennis is an intellectual competition with your opponenent as much as it is a physical one. Both the mind and body have to be in sync for you to play, and the same is true of whoever you’re playing against. Not only are both of you getting a great workout, you can use the game to learn a little more about the person. I recommend tennis as a great physical date night!

You can also join a club! Play in doubles (4 players instead of two, teaming up with another) for the ultimate physical team work experience. Tennis clubs often have scheduled games to play in public place, ones you can find to fit your personal free time and find people that you can play with, possibly even meeting some new folks!

You need more exercise. You need more fun in your life (probably). Give tennis a try, it costs next to nothing, and will end up giving a lot back.

Staying Strong in the Pool? Try these Water Workouts

These Sunburn Home Remedies Will do Wonders