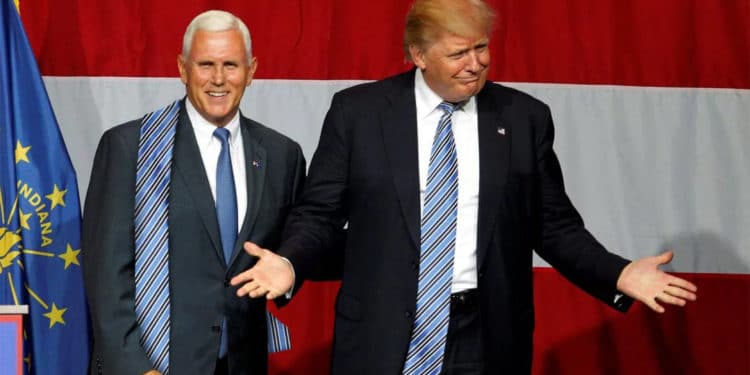 With a 39% approval rating (and dropping), the Russia scandal and those tweet storms, at the six-month mark Donald Trump is well on his way to becoming the worst president in modern history – time will tell. However, I’m not as concerned about his numbers as I am his style. How can a “billionaire” and leader of the free world expect to be taken seriously when his bold power ties hang down to his crotch?

To be fair to the president, politicians aren’t known for their style, but there are exceptions. The founding fathers were stylish men with their powdered wigs, frock coats, stockings and beaver skin tricorne hats. The 1800’s saw politicians dressing in a more traditional way which became the standard norm and dandyism was reserved for aristocrats. Today, the halls of Congress are filled with drab uneventful clothing with every senator looking like a page out of the Brooks Brothers catalog. Again, there are exceptions.

Marco Rubio must have a good tailor because his suits are fitted but not slim fit and yet, they’re not boxy either. His Windsor knots are accompanied by the perfect dimple which gives the Florida senator a respectable presence. Nobody can rock the khaki slacks, gingham shirt and navy sports coat look as well as Gov. of Ohio, John Kasich. And his spiky new hairdo makes him look younger too. Nancy Pelosi has a style which is classic and refined. Unlike her friend and woman who won the popular vote, Hillary Clinton, Pelosi chooses pieces that demand attention and respect. The first modern day President of the United States to possess a hip style was John F Kennedy. His youthful elegance played a role in getting him elected in 1960 as he and his wife, Jackie, looked more like royalty than a candidate for the American presidency. With his trim fit suits, striped skinny ties and Ray Ban sunglasses, JFK connected with youth culture unlike anyone before him and after him. That was until “the Donald’s” predecessor, President Barrack Obama.

Obama, along with Michele, re-defined the presidency with a modern style that swept, at least, half the nation. Barack Obama was, without question, the sharpest dressed President the United States has ever had. Unlike past presidents, he rocked the two piece suit with an undeniable coolness. Maybe it is because he preferred slim cut suits from the legendary clothier, Burberry. While still Senator and candidate Obama, he purchased his suits “off the rack”, but after he wrapped up the nomination he wore a custom made Hartmarx suit in navy blue made of 97% merino wool and 3% cashmere to the acceptance speech. Still not ready to embrace flat front slacks, his pants were pleated and cuffed – hey, he had to appeal to conservatives as well as liberals. The 44th President also still shops at Barney’s in New York. Since the rise of Obama, other countries have taken notice and followed suit. Justin Trudeau got a spread in GQ last year, will hit the cover of Rolling Stone next month with the headline "Why Can’t He Be Our President?" and for good reason. Trudeau possesses a Euro-style which is young and sophisticated. President of Mexico Enrique Peña Nieto wears his suits the right way, close to the body. Dave Cameron left his post last year as Britains top-ranking conservative, but he was on everyone’s best-dressed list. His bespoke Saville Row tailored suits were perfect over trendy sportswear. His ties were mainly in lilac, hunter green, and staid blue. Are you listening to Mister President? Trump needs to stop buying Brioni suits in sizes too big for him. It looks sloppy, cheap and one would never know that they cost him $17,000 a pop. In addition, to cut, Trump often wears his suits wrinkled which look unprofessional at best. Besides wearing a variation of the same suit every day, his ties were okay for a New York real estate tycoon and reality show host, but the shiny solid colors are not very presidential. Besides, they are worn too long. A tie shouldn’t fall below the belt.

When it comes to watch collections, Trump’s pales in comparison to past presidents. More often than not, the president can be spotted wearing a Senna chronograph by Universal Geneve, an Azad Power Tourbillon and the Trump Signature Collection that was briefly sold at Macy’s. Really?

If there’s one style tip we can get from our newest president it would be, do not attempt this at home.

Stylish, Sleek and Sexy ‘Suits’ has been Setting the Standard for Seven Seasons