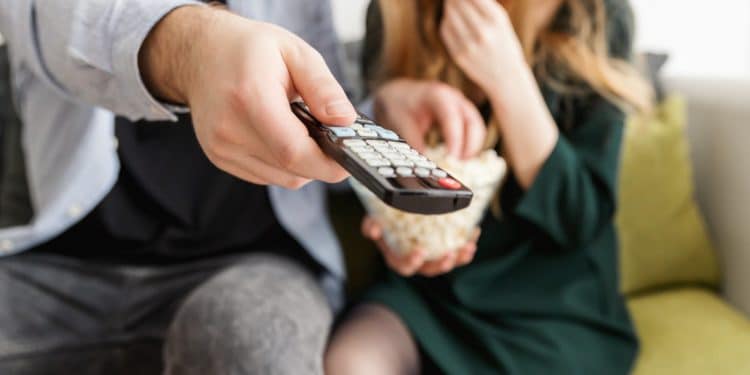 These days there’s more to see on the old tube than ever before. With the seemingly endless options of streaming outlets and any cable or satellite tv outlets providing no less than one billion different channels regardless of the package you choose, there’s something out there for just about everyone.

Turns out, finding something in that sea of content for you and your partner to sit and take in together does wonders for your relationship, in a multitude of ways. Interestingly, though maybe not surprisingly, different genres of programming may even effect your relationship in varied ways.

Research shows that something psychologists call a “shared social reality” brings couples closer, and tends to keep them happier and more committed. A shared reality meaning, say, having mutual friends or friends that are couples, going to the same regular places together or having similar hobbies and interests. These kind of couples activities create a sense of shared identity, helping the two of you feel connected, on the same page, so to speak.

Creating a shared sense of reality doesn’t begin and end with social activities however, not every couple has the opportunity every week to go out and make these social outings happen. Some may even be conducting a long distance relationship, making it very difficult for their social realities to overlap. This is all a really round about way to say that watching television shows together will help with that.

In a study conducted by Sarah Gomillion, for the Journal of Social and Personal Relationships, researchers actually put this to the test. 259 test subjects were told to rate the extent to which they felt their partners hung out in the same social circles. They were also asked to jot down the amount of time they spent consuming the same media or specifically consuming such media together, and report their overall closeness with their partners.

Turns out that sharing content with your partner, be it a tv show, movie, book, or game, had an overwhelmingly positive effect on the relationships of every participant to varying degrees.

The researchers conducted two studies to test this possibility. The first was a survey of 259 college students. Respondents rated the extent to which they felt that they and their partner belonged to the same social circles. They also reported on the amount of time they spent together, their shared media use, and their overall closeness.

What to Watch With Your Special Someone

Well that depends, consider the relationship of you and your partner. Consider the kind of things you like to talk about, or even the kind of things you want to talk about more. Don’t see the time spent watching this stuff as simple filler from one activity to another, but instead as a prompt for natural and organic conversation and connection. Why do we both hate this character so much? What would you do in this particular situation?

I’m not suggesting you go out of your way to be a pain in the ass and question your partner as you watch these shows together, what I’m suggesting are examples of the kind of natural thoughts that occur to you when sharing the “reality” portrayed on screen, and why that matters.

Watching sprawling plot-driven dramas (The Walking Dead, Better Call Saul, Game of Thrones, West World) put your minds in the same virtual fictional space, providing topics of weekly exchanges that eventually turn into ‘big picture’ talks or debates on the each of your values.

Studies have even shown that couples watching characters they’re familiar with getting intimate can inspire intimacy in their relationships. When the mind is already focused in a similar space, and is then lead into an intimate situation on screen, the two of you are already cuddled up together, one thing leads to another.

This is a public service announcement to you, dear reader; watch more television with your partner. Consider what the two of you are going to watch, use the time debating as practice for future debates and to get to know the person you love. Adventure to Westeros or the now-magical crime filled fantasy version of Albuquerque, New Mexico (thanks to Breaking Bad) and learn a thing or two about your beloved.

How to Beat the Heat Without Air Conditioners