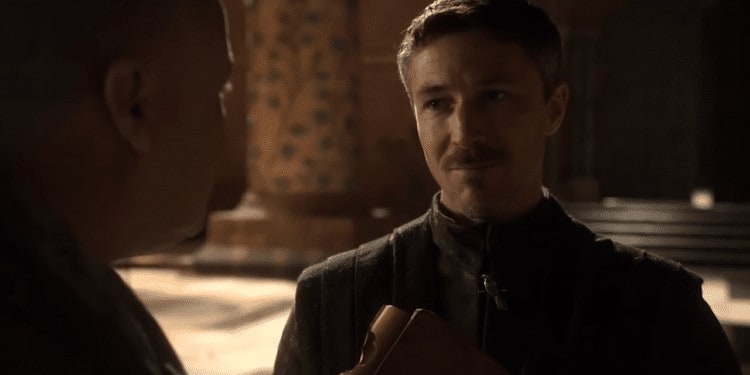 Baelish plays the game of thrones much better in the novels (Image Credits: HBO)

“Game of Thrones” may not be the only television adaptation of George R.R. Martin’s work out in the wild today, but it definitely stands as the most successful adaptation of a fantasy work aside from Peter Jackson’s movie adaptation of J.R.R. Tolkien’s “Lord of the Rings.” HBO’s “Game of Thrones” has become the gold standard by which fantastic political thriller programming is measured today.

But even with “Game of Thrones'” success, some details get lost in translation, which obscures – or even extinguishes – some of the original’s most beautiful story lines. Below are some characters or their plot points that were significantly changed from the source material which we hope can make it to a more faithful adaptation of Martin’s works someday.

Brienne in the novels starts out similarly to how she is introduced in the show – a member of Renly Baratheon’s Kingsguard and a proficient fighter that’s grossly underestimated due to her gender. The significant changes to the Brienne of Tarth in HBO’s “Game of Thrones” is the understatement of Brienne’s willingness to follow her personal code that knights are meant to be honorable.

The maiden of Tarth is one of the most interesting characters that Martin has created. Brienne’s story in the original novelization was a beautiful deconstruction of the noble hero’s journey culminating in her receiving a quest that goes against her personal code of honor and loyalty to Jamie Lannister due to his unexpected kindness and own character development.

While the naivety has been downplayed, show Brienne gets her chance to shine when she defeats The Hound in battle – even if she never encounters Sandor Clegane in the novels who has his own tragic storyline cliffhanger. It’s disappointing that with the significant changes to her own personality and the fate of Catelyn Stark, Brienne’s story no longer follows the juxtaposition of chivalry and reality that the novels had for her.

After the Red Wedding, Catelyn Stark becomes no more than a footnote and a mother figure in HBO’s “Game of Thrones” adaptation rather than the skilled political animal she is shown to be in the novels. But the Catelyn Stark of Martin’s novels comes back with fire, brimstone, and a thirst for vengeance unmatched by any character aside from Arya Stark.

As mentioned regarding the changes to Brienne, the fact that Catelyn Stark no longer rises up once again from the dead into Lady Stoneheart is a significantly missed opportunity for the show. Without Lady Stoneheart, the whole subplot of coercing Brienne to go against her infatuation and loyalty to Jamie Lannister by ordering to her to kill him is lost – a tragic storyline meeting a tragic end in the television cutting room.

The television show’s Petyr Baelish is a sniveling, conniving social climber much like his novel counterpart. But despite his underhanded tactics at vying for the iron throne, the Baelish of HBO’s “Game of Thrones” is too public about his reputation as a schemer.

The book’s Petyr is more subtle, emphasizing likability, trust, and actual friends, while working from the shadows towards his own selfish goals. George R.R. Martin himself has expressed the charm and cunning that book Petyr Baelish has is not present in the television series – robbing the character of more depth that’s fueled by his rags-to-riches desire.

The show’s Petyr Baelish was so bad at working from the shadows that he deserves the death he gets when the Stark siblings gleefully watch him get his throat cut in season 7. If ever the novel’s Baelish acquires the iron throne through his schemes and insincerity, he probably deserves it considering all the effort he has put into rising beyond his low birth.

The original sweetheart of the late Robb Stark was no foreigner to Volantis named Talisa Maegyr, but a daughter of House Westerling – a minor vassal of House Lannister. Jeyne Westerling gets betrothed to Robb Stark but not under the premise of pure love that the TV show portrays Talisa and Robb’s relationship.

Jeyne and Robb’s marriage happens when Robb – in his grief over the fake news that his brothers were slain by Theon Greyjoy – sleeps with Jeyne, who was administering to his wounds. In his guilt for sleeping with a daughter of House Westerling, Robb was forced by his honor to break his arranged marriage with House Frey, which effectively pushed the alliance between the Starks and the Freys over the brink.

The replacement of Jeyne with Talisa is a grave tangent to the original plot as it takes away a layer of complexity to the Lannisters’ plans to remove Robb Stark from the game. In the novels, it is implied that Jeyne may have been planted by the scheming Lannister to force Robb to break his oath to the Freys. In addition, it makes Robb’s decision to not honor his wedding arrangements with House Frey seem like a premeditated bad decision as he starts his relationship with Talisa much earlier than how he sexually encounters Jeyne Westerling.

When introduced both on the show and the novels, Tyrion Lannister is portrayed as a prodigal – wasting his fortune on whores, drink, and fine food. But despite his appearance and diminutive stature, the novels’ Tyrion Lannister does have a heartbreaking history of true love that seals the deal when he finally doles out justice on his father.

Tyrion’s tragic love isn’t Shae – who was even a more treacherous tool that his family used against him in the novels – but Tysha. Tysha was a commoner that Tyrion met and fell in love with but was raped by Tywin Lannister’s men on his order in an act of cruelty, while crushing Tyrion Lannister’s heart by claiming she was merely a whore paid to love him.

Tyrion does mention Tysha in the television series at a few moments but the culmination of the effects of Tysha’s death was more poignant in the novel. Jaime reveals to Tyrion that Tysha was no whore and that she probably truly did love him. This pushes Tyrion to the edge when Shae reveals her treachery by accepting bribes from the other Lannisters during his trial for Joffrey’s death, and the reveal that she shares Tywin’s bed as well as his.

Peter Dinklage’s performance as the complex Tyrion is already filled to the brim with amazing moments in the “Game of Thrones” show. With HBO’s “Game of Thrones” sweeping the story of Tysha under the rug, we can now only speculate if Dinklage could have delivered a more powerful scene during his final encounter with Tywin Lannister.

Yes, Wine Is for Men, Too