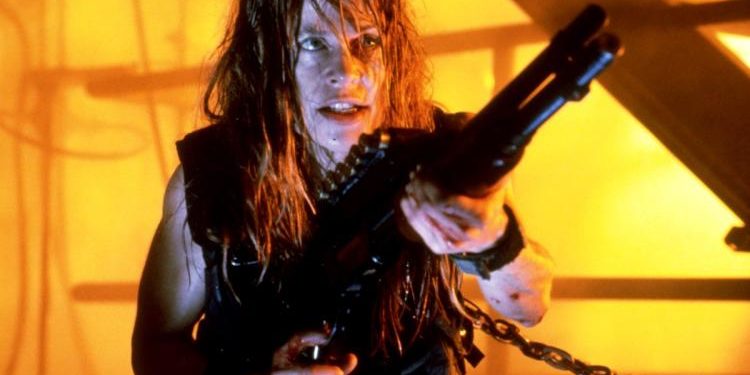 After a 25-year absence, Linda Hamilton is finally about to return to the Terminator franchise, giving fans the world over the cause for celebration.

Hamilton, who played the original Sarah Connor in the first two Terminator films, was confirmed by the Hollywood Reporter to be reprising her traditional role and will be sharing the screen with two other franchise legends: Arnold Schwarzenegger and producer James Cameron. That’s right; you read that correctly. Arnold is finally back.

Cameron seems excited about the prospect of seeing Hamilton return to the roll too, telling reporters "“As meaningful as she was to gender and action stars everywhere back then, it’s going to make a huge statement to have that seasoned warrior that she’s become return. There are 50-year-old, 60-year-old guys out there killing bad guys, but there isn’t an example of that for women.”

Unfortunately, Cameron also told the press that Hamilton will likely not be the central character that she was in the past, but will still play a significant role in the new film. "We’re starting a search for an 18-something woman to be the new centerpiece of the new story," the producer told The Hollywood Reporter. "We still fold time. We will have characters from the future and the present. There will be mostly new characters, but we’ll have Arnold and Linda’s characters to anchor it."

The famed producer, who was married to Hamilton for a brief period in the late 90’s, recently drew the ire of several feminist groups after disparaging Gal Gadot’s depiction of Wonder Woman as "a step backward" for women. It is interesting to see how he will rectify this, and what kind of feminist hero he thinks would be progressive for women’s rights.

The latest Terminator installment is meant to reset franchise canon, eliminating the storyline that took place in many of the other movies and returning to events as they occurred in the aftermath of T2: Judgement Day.

Additionally, James Cameron has hinted that Schwarzenegger might not appear in cyborg form, but may instead appear as the human upon whom the Terminator was based.

An easter egg to a previous Terminator movie showed a human Arnold as a funny-voiced Southern soldier who imparted his likeness to the assassin robots, and it would be interesting to see if Cameron will continue with this plotline, or if it will be scrapped alongside much of the other movie plotlines.

Little else has been revealed about the film so far, but the cast seems stellar, and the original crew is being augmented by director Tim Miller, who previously worked on Deadpool.

Cameron and Miller have also created an all-star writers room to help ensure that this addition doesn’t fall flat as so many of its predecessors had before. The pair is believed to have brought in Josh Friedman, creator of the Terminator television series, David Goyer, of Blade fame, and Dark Angel co-creator Charles Eglee, among others, to help craft a movie worthy of the original Terminator name.

As the direct sequel to Terminator 2, however, the latest Terminator is also in a position to establish the franchise as a trilogy, negating the harsh critical responses that many of the other films attracted and returning the three movies to a position of repute amongst film buffs.

No permanent release date has been disclosed as of yet, but most estimate that the newest and possibly final installment to the Terminator world is slated to come to theaters sometime in 2019. In the meantime, all we can do is wait to see just exactly where Cameron plans to take us, and hope for the best as the original cast comes back together for one last battle against Skynet to save humanity.