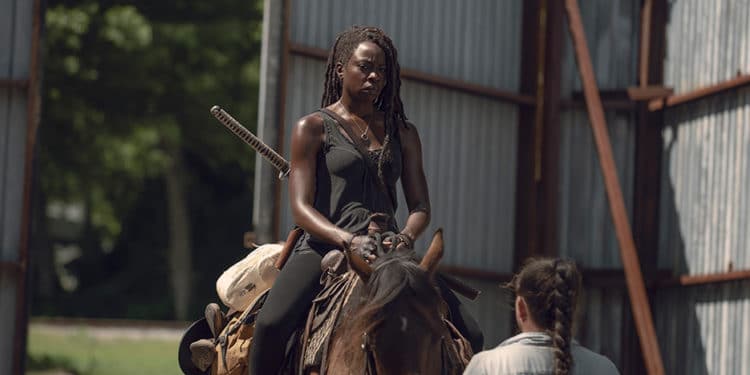 “The Walking Dead” has been taking some hard hits during the past year, with Andrew Lincoln and Lauren Cohan leaving the show mid-season 9. But it seems the popular zombie apocalypse series just can’t take a break. Danai Gurira, who plays Michonne, was just confirmed to make a limited return in “The Walking Dead” season 10 in a style much like Andrew Lincoln’s departure from the show.

As a cultural artifact, “The Walking Dead” has been highly influential in the normalization of the zombie genre during the past decade. Its popularity has allowed genre zombie shows to be seen as acceptable programming, even reaching international recognition, with foreign shows like the Korean Netflix original production “Kingdom” assured that they would reach an audience.

The significant role that “The Walking Dead” played in the popularization of the modern zombie genre makes it harder to see the series continue to lose its star actors like Danai Gurira. While some fans may see the dwindling cast to be a sign of the show’s last hurrahs, the truth is that Gurira’s departure is a mix of both good and bad news for “The Walking Dead” franchise’s future .

Long story arcs may no longer be in vogue

Angela Kang may have saved “The Walking Dead” in the opinion of some fans, but the recent seasons have been plagued by the need to fill holes where characters have left the show. This has made massive time jumps more common in the series to give some breathing room for new stories to emerge.

While the time jumps may originally have been included, Danai Gurira’s lessening involvement in season 10 means that such storytelling techniques will continue to be popular in the show’s future. “The Walking Dead” fans may not be seeing any long story arcs that focus on a short amount of time like earlier seasons, which may put off some fans who dislike the current time-hopping format.

“The Walking Dead” might be gearing up for the big screen

Danai Gurira’s departure does have one potential silver lining for the show. With Andrew Lincoln’s departure come talks about a “The Walking Dead” movie that follows Rick Grimes himself after his bridge abduction in the first half of the television show’s season 9.

The Hollywood Reporter notes that Danai Gurira’s departure after season 10 doesn’t mean the end of her relationship with the breakout role that preceded her rocketing acting career. Gurira’s absences in season 10 and eventual departure could be related to the big screen story that could eventually reunite Lincoln’s Rick Grimes and Gurira’s Michonne – a story that any long-running fan would definitely be excited to see on the big screen.

The doomsayers may be right. The end may be closer than we think – but it’s not all bad

With a potential trilogy blockbuster bringing Rick Grimes’ story to the big screen, AMC might not be pulling the plug on the television show just yet. But the possibility that the television group could be wrapping up the series in preparation for the bigger production is just over the horizon.

As critic Daniel Fienberg points out, “The Walking Dead’s” drama works not just because zombies are scary and people die, but because fans care about the cast of characters. With the show’s main cast significantly diminished and no news about new characters stepping up to take their place or endearing themselves to everyone anytime soon, the next few seasons may be the perfect time for “The Walking Dead” to tie up some loose ends before it goes all in with the upcoming movies.

If fans are worried about the show’s future once “The Walking Dead” movies come out, they should consider that it’s not all bad if the show goes out with a bang with season 10 and a high-budget movie trilogy. Better than the show getting eventually canceled due to obscurity because everyone that anyone ever cared about has left the ever-dwindling cast of characters.