What 90s Fashion Didn’t Need to Come Back 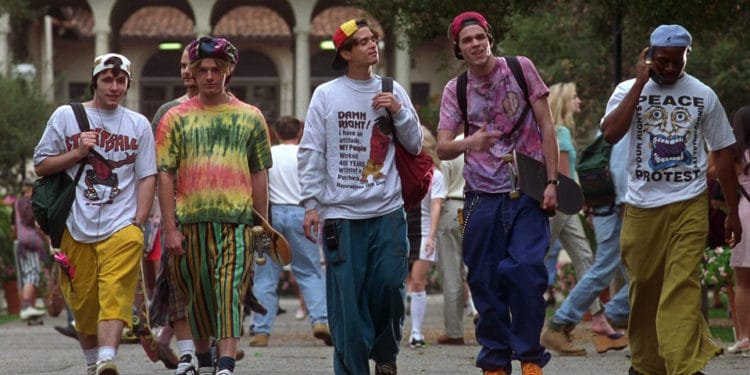 It’s no surprise that events and pop culture of the nineties remain relevant today. However, the same cannot be said about the fashion of this decade.

Seemingly anti-fashion, nineties fashion brought forward trends that were silly, irrational, and failed to make a lasting statement. As the eighties and seventies brought forward wardrobe that not only tackled social issues and spoke for the generation, the nineties had bucket hats with a Surge logo on them. So with this being said, here’s a look at the worst of nineties fashion in hopes that history doesn’t repeat itself.

![846df25fdda03a29ecd65060919b1500–claire-danes-the-s](Still courtesy of ABC)
Baggy plaids/flannel quickly became a thing because that’s what most rock stars were wearing in the early nineties (cough cough the Seattle grunge scene.) For the average consumer, this freelance lumberjack look was a breath of fresh air and it was only a thrift store away. This look would eventually branch out into other looks such as:

The flannel variations got really weird really fast. To make matters worse, big name fashion giants jumped on the bandwagon and started selling the same thrift store flannels for only 200 dollars. What a bargain.

![Jnco175](Photo courtesy of Wikipedia)
If the bottom of the pant leg was smaller than the waist, you were a waste of oxygen. In the nineties, JNCO Jeans were in and miles of denim were utilized for a dozen pants. These pants made your body look awful no matter how you looked beneath them. If a pair of JNCO jeans was paired with a baggy shirt, you’d look a cross between a chess piece and a road cone. Many would pair these pants with a chain wallet because:

JNCO Jeans recently filed for bankruptcy, which is about ten years later than you already thought they did.

![416418724_5565730372001_5565695547001-vs](Courtesy of People.com)
Camouflage makes sense in certain scenarios, but usually it concerns stealth and keeping a low profile. However, nineties fashion made sure that everything received the camouflage treatment. Tuxes, dresses, tank tops, tube tops, and so much more caved to the camouflage trend. Once the standard green camouflage trend was losing steam, other colors were introduced to the market to help things make less sense. Orange camouflage? Yellow camouflage?

![s-l300](Image courtesy of eBay)
This was more of a trend in the late nineties, but this was a time when boldly displaying the brand you’re wearing was acceptable. If you owned something that could’ve doubled as a small scale billboard, it’s likely that you fell victim to this trend. Wearing something that was just a plain shirt was boring, but if it was a plain shirt with a TOMMY HILFIGER logo on the front… it was cool. That’s right, we actually paid more money (for an otherwise plain shirt) to willfully advertise a brand.

![6d1c514b6a583593ee8e09fe5176ee2e](Image courtesy of Pinterest)
Having a tee under a long sleeve shirt makes sense, but having a short sleeve over a long sleeve makes little to no sense. However, that’s what the nineties were all about: wearing several outfits at the same time.

![ddcc2d9123999278d62a26d149ebdc0c–hipster-jeans-the-hipster](Image courtesy of Pinterest)
Low rise jeans were all the rage in the late nineties and launched other fashion mistakes such as:

The intent of the jeans was to showcase what would be considered plumber’s crack in the back, but in the front. If you didn’t get waxed before wearing these jeans, it’s likely that you didn’t wear them out of the house.

![54160a57e495385c033ea708d43fee40](Image courtesy of Pinterest)
These glasses were often paired with goatees (if you were a guy) or gems (if you were a girl.) They were more prevalent during the late nineties and the boy band boom, so that might explain why they surged in popularity during those years and why you can find them at your nearest Salvation Army.

How Stress Can Damage Your Health

The ‘No Gym Required’ Way to Get Your Summer Body Ready