Ben Affleck may no longer be the Batman, but he's got a pretty exciting Netflix film coming in a few weeks 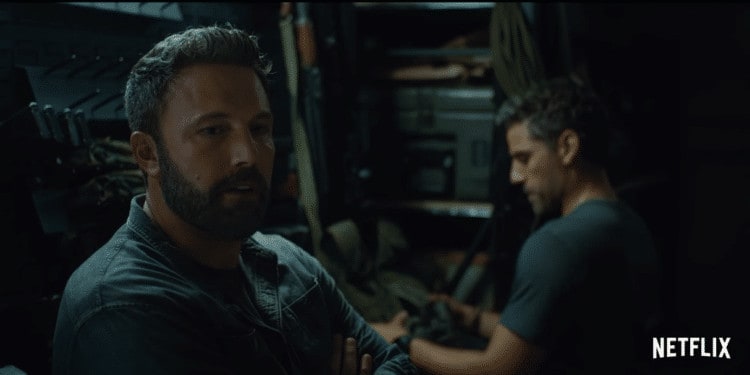 Ben Affleck recently said his goodbyes as the caped-crusader officially on “Jimmy Kimmel Live” but fans of the 46-year-old actor had another new surprise waiting for them during the show. The second official trailer for Netflix’s upcoming action thriller, “Triple Frontier,” was exclusively shown on “Jimmy Kimmel Live,” and it is not one to disappoint.

Below are the reasons why we can’t wait for March to come any sooner with Netflix’s “Triple Frontier.”

The star studded cast is like a more serious “The Expendables”

Even if a number of top names – including Tom Hardy, Channing Tatum, and Mahershala Ali – weren’t able to commit to “Triple Frontier,” the upcoming film is still filled to the brim with some pretty exciting names. Ben Affleck will be sharing the screen with Oscar Isaac, Pedro Pascal, Charlie Hunnam, and Garrett Hedlund as former special forces operatives who want to profit off the specific set of skills they’ve honed in service of their government for most of their lives.

With big names that have worked on the “Star Wars” sequel trilogy, “Narcos,” “Pacific Rim,” and the last “Batman” come big expectations for the action in “Triple Frontier.” This includes betting on which of the five protagonists make it to the end of the movie with their heist target’s private army and other backers gunning for them by the end of the film.

It’s the heist film of the year with a twist

Everyone loves a good heist film as the format meshes so well with a multitude of genres. Films like “Ocean’s 11” and “The Italian Job” have taken their places as classics of the genre, but “Triple Frontier” takes a not-so-common military twist to the heist formula, which adds to the excitement.

While military films have been quite common in the past, military heist films haven’t been as prevalent. The closest analogue to a modern military heist film is 1999’s “Three Kings” starring fellow “Batman” title holder George Clooney, along with Mark Wahlberg, Ice Cube, and Spike Jonze.

But “Triple Frontier’s” mix of military action with the thrilling excitement of the heist isn’t just a simple heist film. The marriage of the two genres is actually a re-birthing of an old classic genre that’s rarely seen nowadays, which brings us to the third excitement factor that the upcoming movie is bringing.

“Triple Frontier” is the modern Western

When was the last time you saw a faithful Western that isn’t from the Cohen Brothers or Quentin Tarantino? Underneath all its modern visuals, military appropriation, and drug lords swimming in cash, Ben Affleck’s upcoming movie is a Western film through and through in spirit.

Five well-trained but aging protagonists make a plan to take their just rewards through criminal activity from another criminal deep within territory where man’s laws are hardly enforced. That sounds like the plot of John Wayne’s “The War Wagon” – definite Western spirit right there.

All You Need to Know About Hair Loss in Men