The follow up to Breaking Bad is shaping up to be even better than it's predecessor. 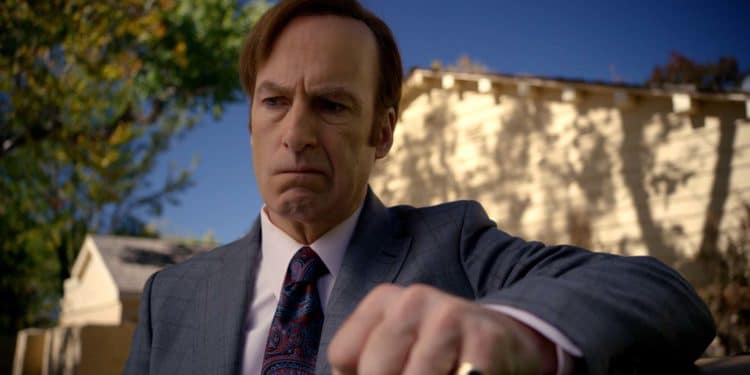 By now, you’ve probably heard a thing or two about Breaking Bad, the show that was so popular it literally started a trend of talk shows about a particular show. That’s right, AMC’s Talking Bad, was a show about talking about Breaking Bad, because people simply could not get enough of Walter White, his cohorts, and the magical world of Albuquerque, New Mexico.

If you were forced to describe BCS in a similar sentence, it’d be something like “scrappy lawyer makes series of increasingly poor decisions”

The final episode of Breaking Bad was in 2013 and roughly 2 years later began the prequel, Better Call Saul, set 6 years before the events of its predecessor. The show follows Walter White’s fast-talking criminal lawyer James McGill before he was known as ‘Saul Goodman. J

ust two weeks ago, the first episode of the fourth season aired, making it abundantly clear that there just isn’t a more well written, thoughtful, artistic and interesting show on television right now.

It’s a little harder to sell than Breaking Bad was, it doesn’t have the sort of storyline that can be summed up in a single sentence like; “meek chemistry teacher with cancer becomes meth kingpin of New Mexico.”

If you were forced to describe BCS in a similar sentence, it’d be something like “scrappy lawyer makes series of increasingly poor decisions”, but even that wouldn’t necessarily be accurate. Let’s break down what it is exactly, that makes this show so special.

Hardcore spoilers for Better Call Saul follow. You have been warned.

If Breaking Bad taught show creator Vince Gilligan and it’s massive audience anything, it’s that patience pays off. Yes, Breaking Bad gives you some drug and money action pretty early on in the show, but it doesn’t really get into the swing of the drama until somewhere near the end of the first season.

Expect the burn to be 5 times slower in Better Call Saul. The show isn’t afraid to take its time really building these characters, turning them into something you didn’t know you were interested in seeing when this all started.

The easy route to success would have been tying this show to Breaking Bad more directly, but aside from Jimmy (portrayed by the now Emmy award-winning Bob Odenkirk) most of the important members of the cast are all new characters, aside from some short cameos.

It isn’t until the more recent seasons that we’ve started to see some characters return, a specifically impressive move in story-telling, seeing as how the show takes place a whole 6 years prior.

You become obsessed with the struggles of Jimmy’s brother, Chuck McGill, genius lawyer conflicted by mental illness. You fall in love with Kim Wexler, a promising young lawyer in her own right, her relationship with Jimmy a compelling timebomb, tragically set to go off any episode now.

You’re not sure how to feel about Howard Hamlin, masterfully framed as the antagonist to all of Jimmy’s antics, until you’re forced to completely reevaluate your feelings about him due to hardcore plot twist toward the end of the first season.

If you have great taste, Mike Ehrmantraut, the old curmudgeonly ex-cop turned criminal jack of all trades, was one of your favorite things about Break Bad. You’d be in luck because he essentially shares screentime with Jimmy throughout the show.

We’re given a much deeper exploration of this character, with an amazing performance by Jonathan Banks, who also won a much-deserved Emmy for his performance on the show.

Okay, But What Makes it So Good?

Everytime a new season of Better Call Saul airs, I find myself giddy with excitement to see what’s coming next, and can’t help but ask myself “why?” There’s no action in the show, not really. The show is particularly mundane, scene for scene. There’s no “I am the Danger” here, and no crazy magnetic super heists to speak of. So what’s so exciting about the show?

When I really think about it, what I come up with is rather simple: There’s no other show like it. Every scene of the show seems written towards a very specific and mysterious purpose, avoiding every cliche in the book as it goes.

The romance portrayed between Kim Wexler (portrayed by the incredible Rhea Seehorn) and Jimmy McGill is nuanced and realistic. They aren’t a particularly kissy or touchy-feely couple, their romantic life is organic, realistic, and often times painful to watch. There are no villains in this story, everyone is comprised of extremely grey area complexities. The relationships between each of the characters are complicated and drawn-out.

Better Call Saul feels a lot like looking in on a very real, very beautifully filmed, a snowglobe of an extremely familiar world. There is a foreboding feeling throughout the 30 hours of content we have so far, that another shoe is going to drop, or that something terrible is going to happen.

Until you realize that the terrible things that happen to us are often not some big cinematic event, but the small things that chip away at us in every relationship, every conversation, every day. We know, love, and understand these people because they remind us of the best and worst in ourselves, and we can’t help but worry about them in a way that makes it all feel so real.

Better Call Saul airs on Mondays on AMC, at 9 PM EST. You can catch up on every episode up to season 3 on Netflix.

No Mo’ FOMO: The Best Cameras to Grab for the Summer Break