The Rock, Jack Black, Kevin Hart, and Karen Gillan all to star in new Jumanji movie 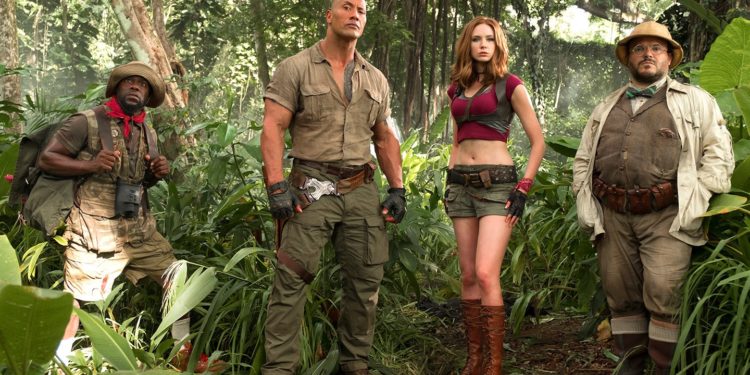 It might be hard to beat Robin Williams’ childhood favorite Jumanji, but the star-studded cast of the latest installment, Jumanji: Welcome to the Jungle, might be able to give the classic a run for it’s money.

Featuring a number of Hollywood’s heaviest-hitters, including Dwayne "The Rock" Johnson, Kevin Hart, Jack Black, Karen Gillan, and Nick Jonas, among others, the movie seeks sure to capture the hearts of a new generation of Jumanji fans and give older ones something to reminisce over.

Two decades after the original

The new films picks up two decades after the original left off, and sees the old fashioned board game transform itself into a retro video game that is discovered by a group of high school students. After finally deciding to play, the teens are sucked into an alternate jungle universe and transformed into adult characters, where they subsequently must survive against the many perils that the Jumanji world has in store for them.

"They are immediately drawn into the game’s jungle setting, literally becoming the avatars they chose: gamer Spencer becomes a brawny adventurer (Johnson); football jock Fridge loses (in his words) ‘the top two feet of his body’ and becomes an Einstein (Hart); popular girl Bethany becomes a middle-aged male professor (Black); and wallflower Martha becomes a badass warrior (Gillan)," the studio told members of the press.

As video game characters, however, each character has three lives, indicated by mysterious tattoos that appear on their arms. “That means all of us, you know, um, well, we’re going to go to meet our maker,” Dwayne Johnson told USA Today.

Despite their new found abilities, however, the characters are still, at their core, only high school students thrust into a brave new world, and their true personalities continue to bubble up throughout the movie.

“What would you discover about yourself when endowed with capabilities you didn’t know you had and live in someone else’s skin for a day?” director Jake Kasdan asked the media. “It’s the story of these kids taking that ride. Not these action heroes.”

To better tap into the role of an insecure high-schooler trapped in a man’s body. Johnson says “I tapped into my insecure 16-year-old self. No girl wanted to talk to me,” and brought back those feelings to create much more believable character.

The foursome needs to learn how to work together if they hope to find their way out of the game, but if they lose all three of their lives, they will be trapped in the jungle forever.

Nick Jonas also makes an appearance in the movie as Jefferson "Seaplane" McDonough, "a mysterious stranger that they meet in the midst of their adventure," according to director Jake Krasdan "At first, they’re not sure what to make of him, but he becomes a part of their effort to get out."

The new movie will also feature a few throw backs to the original movie. Jack Black told reporters for The Hollywood Reporter "We’re exploring this jungle and trying to conquer the game; it’s life or death, but while we’re there, we find clues left behind by [Williams’s character Alan Parrish]. He built up a full-blown jungle house, similar to a Swiss Family Robinson situation. It’s like he’s there helping us without actually being there.”

He went on to say “[In the original] you never got to see the inside world, but this one takes place primarily inside the jungle of Jumanji. That’s the coolest part of the film — we’re able to transport the audience to that secret and wondrous land, with the danger and the beauty.”

Jumanji: Welcome to the Jungle, directed by Jake Krasdan and written by Chris McKenna, Erik Sommers, Scott Rosenberg and Jeff Pinkner, will be swinging into theaters December 20, be sure to check it out!

10 Signs You’re in the Right Relationship

The Rock, Jack Black, Kevin Hart, and Karen Gillan all to star in new Jumanji movie