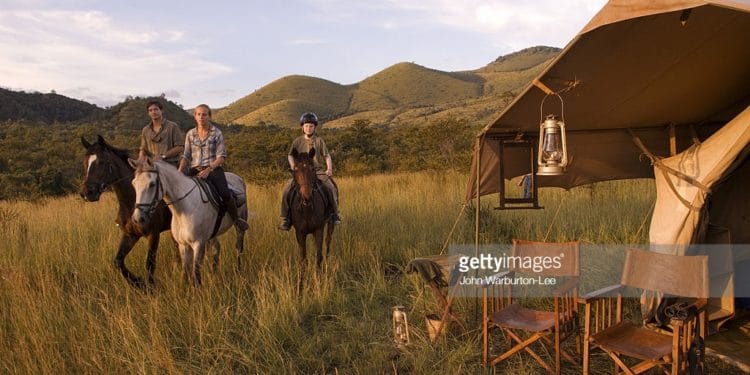 The Great Wildebeest Migration, one of the ‘Seven New Wonders of the World’ is unfolding in Masai Mara. The migration of over two million animals including wildebeest, zebras, and gazelles, will be a sight to behold. It will be filled with spectacular scenes as the predator including big cats and crocodiles lurk in the waters and bushes. The hunting, stalking and run down of these animals by the ‘big cats’ a spectacle you can’t miss during the migration.
However, the Great Migration will be at different sections of the iconic Masai Mara from June to September. Therefore, your choice of Masai Mara accommodation must ensure you are perfectly situated to see the migration. We have rounded up a list of top best safari camps in Masai Mara to catch the Great Migration for you.

Situated right on the Northern edge of the game reserve, Elephant Pepper Camp provides all the romance a safari enthusiast would be looking for in a safari camp. The 8-tented bush camp is located in prime wildlife and along the Great Migration corridor. The breathtaking view of the open plains allows you to see the migrating herds right from the camp. Apart from game viewing, the camp offers an incredible safari camping experience. You will be impressed by their mixture of modern and antique furnishing. However, the camp is taken down during the rainy season.

If you are looking for luxurious safari package, then book Saruni Mara safari camp. The luxurious and intimate lodge only accommodates 12 guests at a time in its spectacular six cottages. That makes it perfect for people who don’t feel comfortable staying in a tented camp or those bringing the family. It is located right in the Northern Masai Mara making it perfect for year-round wildlife viewing. So if you are planning to come to mara in the months of June and July, this is perfect safari lodge to book. It is also a great choice for a honeymoon safari.

Serian Camp has for many years stood out as one of the attractive safari camps for wildlife enthusiasts. The camp is tacked right in the heart of Mara Game reserve and along the Great Migration corridor. Its huge population of predators makes the scenic hunting grounds for lions and other big cats. The camp also serves as the main research base for the Mara Predator Project due to its high population of the big cats. You must book early before the migration starts.

Located on the borders of the Mara Game Reserve’s Northern boundary, Mara Plain safari camp offers a fantastic game viewing experience away from crowds. It is a 6-roomed camp that offers a tranquil environment for those looking for a thrilling honeymoon safari experience. Its breathtaking view stretching over the vast savanna landscape allows you to catch the migration from the camp.

This is the final stretch of the Great Migration as the herds move from the Northern side towards south on their way to Serengeti. If you are planning to catch the migration during this time, these are the best safari camps to book:

Naibor has a total of 7 tents which are private units each complete with beautifully crafted Veranda. What you will love most about these tents is the surrounding woodland setting that gives them complete privacy. That makes it perfect for lovebirds coming to Masai Mara to catch the Great Migration. The camp is set along the migration corridor making it a perfect point to view the spectacle.

Cottars camp is one of the oldest safari camps in Masai Mara Game Reserve. The 1920’s safari camp will give you a feel of the original spirit of ‘Safari’. The site of the camp is reminiscent of the golden bygone era when safari was a ‘real’ adventure into the wild. The camp still enjoys vintage safari feel that makes it unique from the rest. Cottars is located along the Great Migration corridor where it is surrounded by a cattle of wildebeest. It is the best safari camp for a September safari.

The Best Wellness Retreats and Getaway Spas for Men in the U.S.