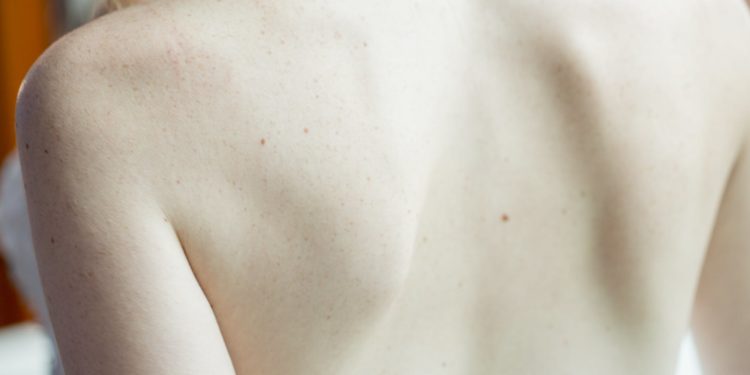 Acne is terrible no matter where it turns up, the worst of all obviously being the face. Few things are worse (dermatology-wise) than waking up for your day, only to look in the mirror and feel grossed out by a smallish white pustule stealing all of the focus away from the rest of your carefully manicured look.

Perhaps the least talked about acne related terror of all is the dreaded back acne, often stemming from our own inability to scrub down the center of your own back during your daily washing ritual. You’re putting in all this effort to eat right and get in shape, and the last thing you want to worry about is that your back has got a few pimples on it.

Some people suffer from this minor (but not all that minor) issue chronically, for others it just pops up from time to time. Before we dive into destroying that back-acne for good, let’s cover how you may have gotten it in the first place so we can try to avoid getting it again altogether.

How You’re Getting it

Back acne can stem from quite a few different places, but some are way more prevalent than others. Lots of people have some minor difficulties reaching their back in the shower, and whatever scrubby thing you’ve got for the job is probably not helping all that much.

For a lot of people, it seems to be triggered by post-workout sweat and exposure. Sometimes it’s not quite acne at all, but folliculitis, which is small hair follicles on your back being a little clogged up by dirt, sweat or bacteria.

For some, it’s even a hormonal issue, particularly if you’re experiencing deep or tender bumps beneath the surface of your skin. This is probably the rarest case. My point is, it probably comes down to your hygiene routine. The normal and most prevalent form of acne comes in the form of comedones (you know them as whiteheads or blackheads) and can likely be solved with small changes to your diet and better shower products. Speaking of which:

How to Get Rid of It

Whatever shower products you’re currently using, get ready to switch them out completely. You don’t have to throw them out I guess, but you won’t be using them anymore. From now on, you’ll need at least one body wash that has benzoyl peroxide in it. Every dermatologist you ask will tell you benzoyl peroxide is the best for clearing acne, as its job is to kill bacteria outright. Don’t use it every day though, and once your back acne is all cleared up, go with the less intense stuff.

Dandruff shampoos (whether you have dandruff or not) do wonders to eliminate breakouts on the back because sometimes people find that what the thing is back acne, is actually something called pityrosporum folliculitis, which is an intense overgrowth of yeast normally found on your skin concentrated in that area. Antifungal shampoos and body washes will be perfect for this if you’re uncomfortable with using benzoyl peroxide for whatever reason (the stuff can be harsh for some parts of the body, but not typically the back).

It’s awkward, but make sure you’re reaching back there and scrubbing best you can too. It wouldn’t hurt to have a partner do the job for you, but for the times when they aren’t available, get a better scrub brush than whatever you’ve been using. It’s okay to shell out a little extra on a nice one to make sure you’re really getting in there and destroying the bacteria build-up you’re dealing with.

As a last-ditch effort, typical face mask products will work for your back acne (most any acne you have). Apply over the counter face and peel masks (extra strength) to your affected areas and let it sit before peeling it off 10 to 20 minutes later.

From now on, stay fresh and keep in mind where the sweat and dirt might be piling up on your back after a long day. Swap out work out wear as often as you work out, and even if you only have that one shirt available because you haven’t done the wash recently, don’t wear it.